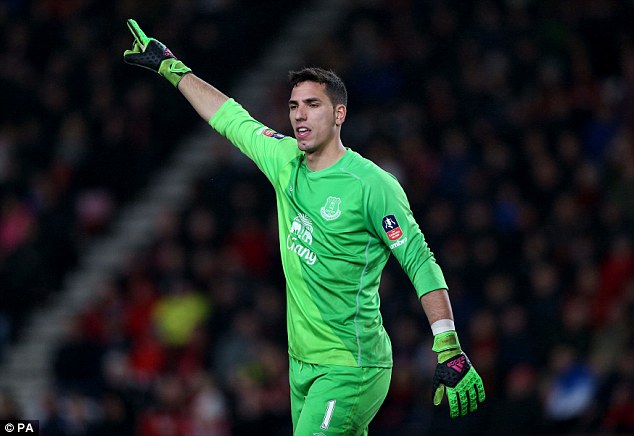 Joel Robles claims he needed to take care of a lot of crosses during Everton’s 2-0 victory against Leicester on Monday evening.

The 26-year-old was called into the starting line-up to replace the injured goalkeeper Maarten Stekelenburg to make just his second Premier League start for Everton this season.

Robles has now produced two clean sheets for the Blues, preventing the champions from scoring on Monday and keeping out West Ham in the 2-0 victory in October.

The goalkeeper hopes to take his first team opportunity under Ronald Koeman and was pleased with the win, claiming it was the best Christmas gift for his side.

“It’s a massive three points. It’s the best present for the players, my teammates, staff and for the fans” said Robles, as reported by the Liverpool Echo.

“It’s not easy to play away against Leicester. Obviously for a keeper the clean sheet is important. I needed to help the team by taking the crosses – there were a lot.”

Stekelenburg is the firm number one choice at Everton but Robles is doing his best to prove why he should be in between the sticks, having not conceded a single goal in his two starts this campaign.

The Blues have been struggling to gain consistency under Koeman this season and are currently sat in 7th position in the Premier League.

It was just their third victory in 13 games on Monday after suffering a late 1-0 defeat against Liverpool in the Merseyside derby at Goodison Park last week.

Their next fixture is on Friday against Hull City.

In other Everton news, Ronald Koeman revealed doubts over the future of this player.