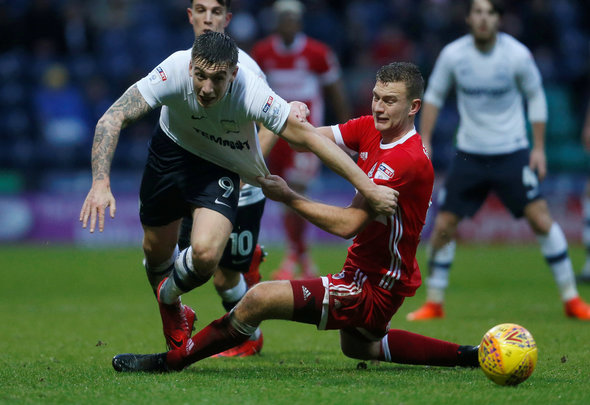 West Ham fans are excited about the prospect of new signing Jordan Hugill starting against Brighton on Saturday.
The former Preston North End striker signed for West Ham for £9million on deadline day.
And now manager David Moyes has said that “he’s ready” to make his mark instantly in the Premier League.
Talking in his pre-match press conference, as quoted by the official West Ham website, he said: “I think Jordan is ready. I think he could play and he won’t let us down in terms of his effort and commitment.”
He might not have been the stellar name that West Ham fans were looking for in the January window – Hugill has eight goals in 27 Championship appearances so far this season – but they’re happy to get their first glimpse of him at the Amex.
Here is a selection of the best reactions from West Ham fans ahead of the 3pm kick-off on Saturday:

Just love the way the hammers fans want Hugill to be a star. We love the underdog. Come on son, take your chance @JordanHugill #coyi

Everton were sniffing around him. He’s a decent left back. How can you comment on Hugill when we ain’t seen him yet? Did you hear of Vardy before Leicester? Ok here’s another … Antonio? Came from forest & look at home now. Your nit picking over 1 player

Let’s get behind hugill ⚒

Personally, I'm pretty happy with the Jordan Hugill signing for #WHUFC – looks like a decent Target Man with a hell of a Poacher's finish! Welcome to West Ham UNITED. #COYI

Hope he gets his chance and smashes it.

Jordan Hugill will score a hat-trick in the Brighton match, I can feel it in my bones!

I would like to see Hugill thrown in against Brighton at the weekend if he is eligible…with his apparent work ethic and determination to prove himself he might teach some of the older pros a thing or two and ruffle a few feathers.

Good thing with Moyes is every player he signs will have a high work rate and good attitude. I think Jordan Hugill is in that bracket and that's ultimately what you need in a player first and foremost then the ability #whufc