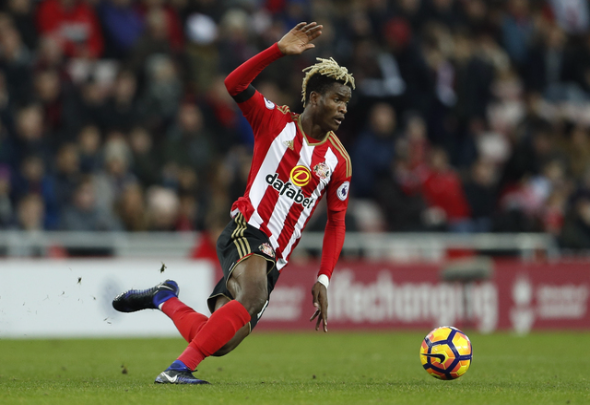 Sunderland enforcer Didier Ndong is set for a return in his side’s next league match against Tottenham, according to a report.

The Sunderland Echo has claimed that the 22-year-old key midfielder is likely to become available for the Black Cats again after Gabon were dumped out of the AFCON on Sunday.

The youngster was unable to help keep his national team in the competition as Gabon picked up three draws from their three fixtures.

This will present a huge boost to David Moyes’ struggling north east side, who will be happy with an early return of one of their star players.

The young defensive midfielder has played in 16 of his side’s 22 league fixtures this campaign and has been one of the bright sparks of a so far poor season for the club.

Ndong played the full 90 minutes in the reverse fixture earlier in the season at White Hart Lane, picking up a booking as his side fell to a 1-0 defeat from a Harry Kane goal.

Meanwhile, Tottenham are one of the few teams in the Premier League not have lost a player to the AFCON due to midfield warrior Victor Wanyama’s Kenya side not qualifying.

But, it is likely that they will be without Jan Vertonghen for the 31 January fixture against Sunderland, while Erik Lamela is also still looking to return from a long-term injury.

In other Tottenham news, Rafael van der Vaart has made a bold claim about this Spurs side.