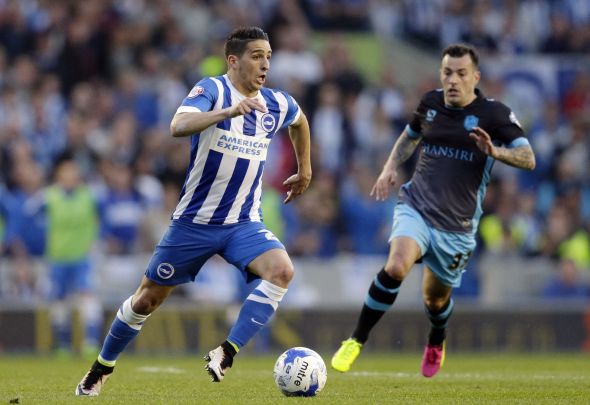 Anthony Knockaert has refused to be distract by strong interest from Championship rivals Newcastle, as he aims to spearhead Brighton to promotion.

The Mirror claim the Magpies had a £6million bid for the playmaker rejected by the Seagulls last month.

It is said that Newcastle manager Rafael Benitez is set to return with an improved offer for the playmaker before the transfer window cut-off on 31 August.

Knockaert revealed that the Newcastle offer did not distract him as he prepares to face Rotherham on Tuesday night.

“I am totally focused with the team and I have been all the time,” the former Leicester star said. “There is no way the Newcastle bid distracted me.

“I love this team. The spirit is unbelievable. Our ambition is to get into the Premier League. This club deserves to do it and I will do everything to try to make it happen.”

A move for Knockaert looks even less likely after the Shields Gazette claimed that the 24-year-old is set to be offered a new contract to stay at the Amex Stadium, despite having three years remaining on his current Brighton deal.

Knockaert left the Premier League champions last summer to play for Belgian giants Standard Liege. After scoring seven goals in all competitions during the first half of the season, the Seagulls came calling and Knockaert put pen to paper on a £2.6million deal.

He showed just what Newcastle were missing during Brighton’s first win of the season, scoring the first goal for Chris Hughton’s side in their 3-0 Championship win over Nottingham Forest.

Championship big-boys Newcastle are in the hunt for an instant return to the top-flight, after former Real Madrid manager Rafa Benitez has so far dwarfed his Championship rivals with over £40million of spending on eight new recruits.

In other Newcastle transfer news, this £7million-rated defender could be the man to replace Arsenal bound Shkodran Mustafi.