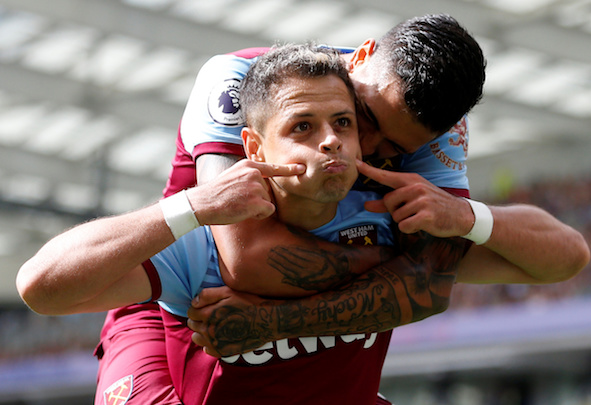 Danny Mills claims that West Ham striker Javier Hernandez will be expecting to be axed from the starting XI against Watford as Sebastien Haller returns to fitness.

Speaking exclusively to Football Insider, the former Leeds and England defender says that the Mexican international will realise he is set to play second fiddle to his new attacking teammate after the Irons spent big on his capture this summer.

The French hitman cost the Irons a club-record transfer fee from Eintracht Frankfurt but was forced to miss the second game of his new club’s campaign through injury.

With Manuel Pellegrini confirming that the 25-year-old would be available once again versus Watford, Mills says that Hernandez will be expecting to drop to the bench again despite having scored against Brighton in their last outing.

Mills told Football Insider: “It still has to be Haller (starting). He’s the new signing, he’s the one that they’re all looking to. I’d be very, very surprised if he doesn’t start this weekend.

“He’s (Hernandez) accustomed to that, he’s done that an awful lot throughout his career. I don’t see that being a big problem. He will have known – when you bring in a striker for big money, as long as they’re playing well, they’re going to start.

“Hernandez would have known this was coming – it’s not like he was ousted, not like he was the regular all of last season and that’s changed. He’s a very good professional and he will knuckle down and work hard.”

With Marko Arnautovic Pellegrini’s first-choice striker last season, Hernandez was only able to feature 28 times across all competitions, with eight goals to his name.

The 31-year-old has a total of 17 goals and four assists in his 63 appearances for the Hammers, just over half of those outings coming in the starting XI.

In other West Ham news, Football Insider can reveal that a MLS heavyweight side are plotting to sign one of the Hammers’ senior stars.