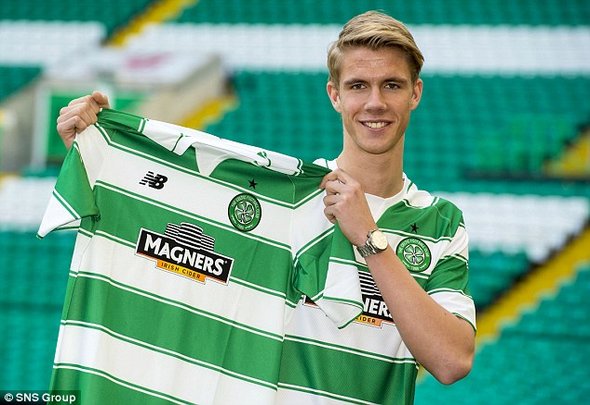 Celtic manager Brendan Rodgers is preparing to mould Kristoffer Ajer into a centre-back.

The Hoops manager arrived in Glasgow this summer and, after completing the signing of Mousssa Dembele from Fulham, is now looking to re-position another new signing.

Ajer was signed by predecessor Ronny Deila as a midfielder but Rodgers has played him at the heart of defence twice.

The former Liverpool manager is convinced that the Norwegian wonderkid could be the solution to the club’s centre-back problems.

“I just see him as a good footballer. At his size, being very comfortable on the ball, once you get that aggression into your game, it’s a position he could play very well.”

The Bhoys are currently in the middle of a crisis after a spate of injuries have left them short of options at the heart of their defense.

Injured duo Jozo Simunovic and Dedryck Boyata could be unavailable for the Champions League qualifying rounds, while Charlie Mulgrew is still in contract talks with his future at the club in serious doubt.

18-year-old Ajer signed a pre-contract agreement with the Bhoys in February while still with Norwegian club Start and has cost Celtic £750,000.

The multi-faceted youngster has combined his studies with football over the last few years in addition to running his own fashion blog and photography website.

Rodgers managed his last game of competitive football in October 2015 for Liverpool. The 43-year-old manager was sacked under an hour after drawing the Merseyside derby 1-1, leaving his side in 10th place after eight games.

Despite his relative success in English football Rodgers is yet to win a major trophy at any of the club’s he has managed, something that will have to change if his time in Scotland is to be a success.

In other Celtic news, the Hoops are ready to meet the £1million release clause in the contract of Wales right-back Chris Gunter.