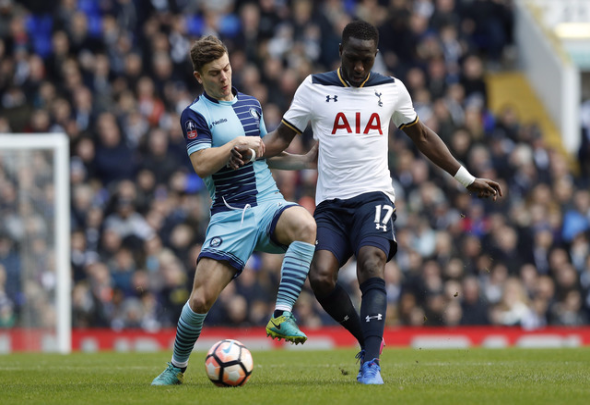 La Liga side Valencia are weighing up a deadline day move for Tottenham midfielder Moussa Sissoko, according to a report.

Spanish publication Super Deporte claims that Valencia have failed in their bid to land Manchester United youngster Andreas Pereira on a loan deal so they have turned their attentions to the 28-year-old.

Valencia are still capable of signing players as the Spanish transfer window closes at 11pm (UK time) on Friday evening.

The Frenchman has failed to live up expectations since making his big money move to White Hart Lane last summer from Newcastle United.

Although he featured in 34 matches in all competitions for Spurs last season, he was brought off the bench on numerous occasions and he failed to score a single goal during his debut campaign.

Sissoko has managed to enjoy more minutes with the first-team this season, starting against his former club Newcastle on the opening day of the Premier League season and making cameo appearances in the home games against Chelsea and Burnley.

The midfielder’s lack of form saw him omitted from the France national squad for their upcoming World Cup qualifiers this week.

The Frenchman’s current contract with Spurs runs out in 2021.

All parties involved will be delighted if both clubs can reach an agreement that would see Sissoko leave North London this summer. The midfielder is likely to endure a similar season to the previous where he will be asked to make an impact off the substitutes bench as this doesn’t seem to be his strength. With the World Cup in Russia on the horizon, Sissoko will need to playing on a regular basis with a top team in order to enhance his chances of regaining his place in the France squad. Spain would be a perfect platform for him as he could test himself against teams such as Barcelona and Real Madrid not to mention that Valencia have started off the season in fine style.

In other Tottenham transfer news, Spurs fans shared their disappointment at this eleventh hour transfer.