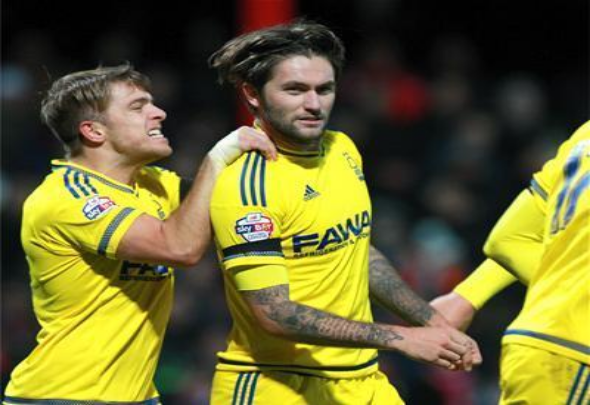 Henri Lansbury has criticised the officials on Twitter following Nottingham Forest’s 2-1 loss to Sheffield Wednesday on Saturday afternoon at Hillsborough.

A Kieran Lee stoppage-time winner broke the hearts of Forest, who had previously led the game through a goal from Lansbury in the 35th minute.

However, Lee’s brace on his 150th appearance for The Owls was enough to secure victory and send Forest back to the City Ground empty-handed.

Lansbury slammed referee Kevin Friend, who saw no foul on Ben Osborn on the edge of Forest’s own penalty area in the build-up to Wednesday’s late winner.

Lansbury was also disappointed with the decision to give Wednesday a controversial throw in in the lead up to their equaliser.

Gutted with the result 2 bad decision that cost us thanks for the support from the fans ! 2 massive games coming up nffc

Further misery was then piled on the shoulders of Lansbury in injury time, as his foul on Atdhe Nuhiu was met with his fifth yellow card of the campaign, resulting in a one-match suspension.

“It was a good game against a good team,” he said, as quoted by the BBC Sport website. “It’s disappointing to lose at the end of the match.

“I’m disappointed about two bad decisions, too, because it makes the difference at the end.

“We defended very well and we felt that if we could score at the start of the second half, perhaps we can change the game. We have had several games where we’ve showed a good defensive mentality.”

Montainer also explained his frustration to Sky Sports over the two decisions that went against his side.

“A throw-in was given to the opponents before the corner (for Wednesday’s first goal). I said at the time that I was not sure but it is clear on the video.

“There was also a foul in the build-up to the winning goal. Sheffield don’t need this help because they are a very good team. The decisions killed us and it is very frustrating.”

The Reds now sit 15th in the Championship after picking up just one point from the last three league outings.

Their next game will come at the City Ground on Tuesday night as they host Fulham, who sit two points ahead of them in 13th place.

In other Nottingham Forest news, Noel Whelan has had his say on this new Forest man.