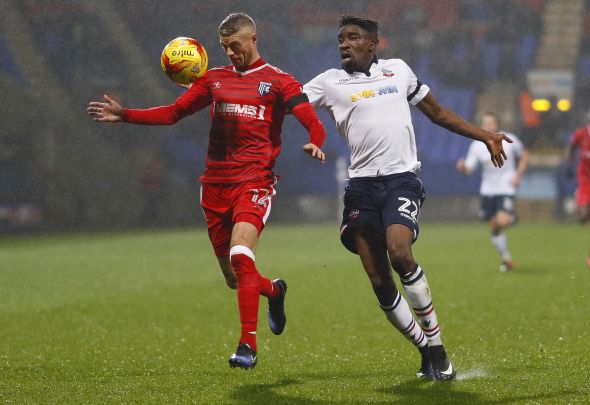 Phil Parkinson has revealed that he is keen to keep on-loan Newcastle star Sammy Ameobi at Bolton beyond the January window.

Ameobi is on loan at Bolton until 2nd January and is then due to return to his parent club.

Speaking to Bolton’s official website after his side secured a superb 4-0 victory against Gillingham, manager Parkinson wants the 24-year-old to stay at the Lancashire side until the end of the season.

“Sammy needed playing time,” Parkinson said. “He’s developing as a player like the team is. We are pleased with him. We obviously want to keep him around, he’s been immense for us.

“He’s enjoying it here so obviously we’d like to keep him. You learn things when you’re playing games, he’s getting better and is a very likeable lad.”

Toon loanee Ameobi has a contract with Newcastle until next summer, and could be available in a cut-price January deal as the Toon look to avoid losing him on a free transfer.

During the 4-0 win over Justin Edinburgh’s Gills, Ameobi rounded the victory off with a superb curling effort that flew into the top corner after cutting inside from the right flank.

Ameobi has made 20 league and cup appearances for the Wanderers this season, finding the back of the net on four separate occasions as Bolton currently sit in the automatic promotion places.

Newcastle would be foolish to allow a player of Ameobi’s quality leave on a free, or for any cut-price fee. The younger brother of Shola Ameobi showed just why he should be handed a new Toon deal in the near future in front of the television cameras last night, as he starred and rounded off the performance with a goal right out of the top draw. Causing unlimited problems for League One defences, Ameobi has already proved that he can make a difference in the Championship. Now with plenty of game time under his belt, Benitez must look to include the academy product back into his squad as the Toon eye a place back in the Premier League.

In other Newcastle transfer news, this report details what Benitez will do with Aleksander Mitrovic in January.