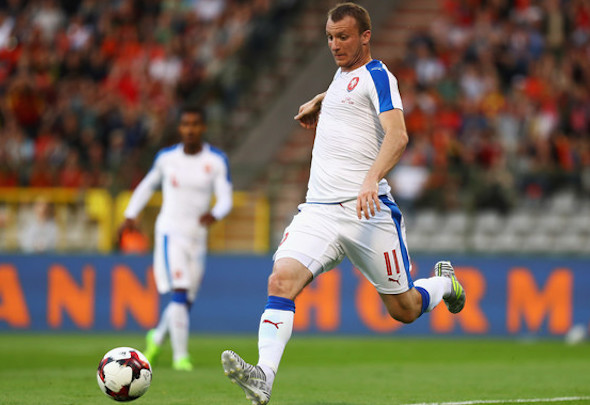 By Richard Parks
Leeds United fans have taken to Twitter to react with surprise after it emerged that their club have tabled a big-money offer for prolific Czech centre-forward Michal Krmencik.
The 11-times Czech Republic international, who plays for league leaders Viktoria Plzen, was the subject of intense interest from around the globe during the recent January window after his stunning recent goal machine exploits.
Plzen chief executive Adolf Sadek told Czech newspaper Dnes that the Yorkshire giants were among the clubs who lodged formal bids for Krmencik, 24, that were all rebuffed to appease manager Pavel Vrba.
“In the summer, Slavia came in, Leeds in the winter, then Montpellier, Bordeaux, eventually Newcastle,” said Sadek to Dnes. “There were extraordinary offers.
“In winter there was no figure to convince us. I promised the coach.” Sadek does not divulge the figures, but Dnes report that the bids went as high as £12million.
Krmencik has been in prolific form this season for Plzen, who top the Czech league by a mammoth 14 points ahead of second-placed Slavia Prague.
The front man has scored 16 goals and supplied seven assists from 20 matches at a virtual goal-a-game rate, and his international record also stands at a highly impressive six goals in 11 games for the Czech Republic.
Leeds have focused on unearthing gems from the cheaper overseas market in the last two windows, but their biggest signing since Andrea Radrizzani took sole control of the club last May was the £4.5million spent on Middlesbrough’s Adam Forshaw two weeks ago.
Supporters are excited at their club’s interest in such a prolific front man whose statistics are mind-blowingly good.
Here is a selection of the messages on Twitter:

He’ll be gone somewhere in the summer. I watch Czech league and have seen him in Europa too. He’s a very good goalscorer with potential to grow.

That’s some find. Casting an eye over his stats, I can see why he’s in demand.

Performance so far this season. pic.twitter.com/mBPfH8rTKu

Where do you find this stuff aha

In other Leeds United news, Andrea Radrizzani has hit back at criticism of the club’s transfer policy and hailed two Victor Orta signings who are gems.
Don’t miss out on breaking and exclusive Leeds news by clicking here for our brilliant 24/7 updates on Facebook, Instagram and YouTube.