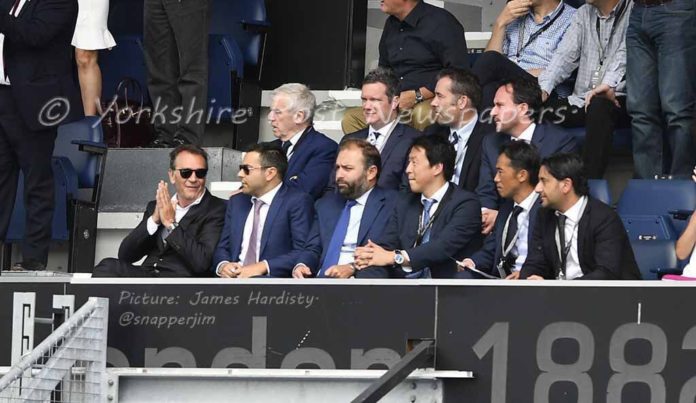 Leeds fans went into Twitter meltdown after billionaire Andrea Radrizzani dropped a major hint on Wednesday morning that he is close to taking over the club.

The Italian businessman, who has been strongly linked in recent months with buying the Yorkshire giants, posted a message on his personal Twitter account that suggested talks are at an advanced stage.

“One step closer, but need more time,” Radrizzani said, accompanied by an image of two hands clasped together.

This comes after Italian site Calcio Mercato claimed last week that Leeds owner Massimo Cellino wants to return to his native Italy and become a shareholder in Serie B club Brescia.

This has heightened speculation that Cellino’s departure from the Championship club is imminent.

The Sun reported recently that the proposed sale of the Yorkshire giants to sports mogul Radrizzani could be completed within the next few weeks.

Leeds fans are keen to find out more information about the talks and how close Radrizzani is to completing a takeover of one of English football’s biggest clubs.

Many supporters messaged the businessman urging him to take as much time as he needed to complete a smooth takeover, while others want a quick conclusion to the deal to enable the club to back manager Garry Monk in the January transfer market.

Could this prove radrizzani is buying Leeds United??? #lufc pic.twitter.com/4aBG19tThL

take all the time you need Andrea we need a smooth successful takeover which can help and support the manager on getting #lufc promoted https://t.co/rSIpiBVYcV

Let’s hope this takeover at Leeds can get done quick.. Spend some money in January?#lufc #mot

@LUFC here’s a good thing for you … announce Jansson – takeover and intent to spend 123623 million on players on xmas day. TIA. #lufc

Leeds are sixth in the Championship as they prepare to host leaders Newcastle at Elland Road on Sunday in what will be the first sell-out at the ground in years.

Garry Monk’s side are on a crest of a wave after winning nine of their last 12 matches in all competitions. They have 26 points from 16 league matches, while Newcastle’s 16 games have yielded 37 points.