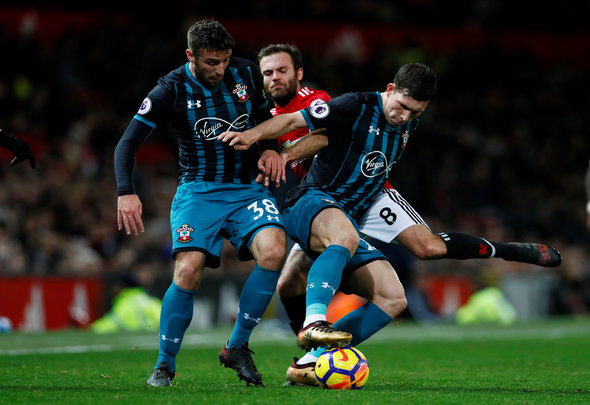 Leeds United are one of three Championship sides in the hunt for Southampton left-back Sam McQueen, according to a report.
The Sun [print edition, Friday 5 January, page 60] has claimed that McQueen, 22, could join Leeds, Reading or Brentford on loan this month.

McQueen has made just six appearances in the Southampton first-team in all competitions this season but is very highly-rated by the St Mary’s faithful, especially after he helped keep a clean sheet at Old Trafford against Manchester United last week.
The one-time England Under-21 international kept Juan Mata in his back pocket for 90 minutes as Southampton earned a brilliant 0-0 draw against Jose Mourinho’s side.
McQueen is also adept at playing on the left-wing, where he has had a lot in Premier League 2 this season with Southampton’s Under-23s side, where he has scored four goals in six games.
Leeds have been in need of a traditional left-back ever since Charlie Taylor left for Burnley in the summer.
Cameron Borthwick-Jackson was signed on loan from Man United as a replacement but Thomas Christiansen has barely played the 20-year-old and has instead opted to play the right-footed Gaetano Berardi or Vurnon Anita there instead.
Football Insider verdict
Leeds really need to get in a left-back this month and McQueen is the perfect solution. Berardi has done well in the role considering it’s not his normal position, but Christiansen, if he wants to keep the club’s promotion dream alive, must go out and find a square peg to fill a square hole. McQueen is brilliant in both attack and defence so will not only be able to help out the backline, he can also provide some killer crosses into the box to supply the likes of Kemar Roofe or Pierre-Michel Lasogga. To have a physical target man up front, Leeds need to make the most out of attacking full-backs. Luke Ayling is more defensive on the right and Berardi has not been able to do much with his weak foot. McQueen will finally offer some attacking play from the deeper areas to help the Whites get more goals.
In other Leeds United news, it has been confirmed that this Whites striker has left the club on loan.
We’ve launched a << BREAKING NEWS FEED>> exclusively for your club. ‘Like Us’ on Facebook by clicking here if you want 24/7 updates on all Leeds United breaking news.