Leeds United are in the race to re-sign West Ham defender Sam Byram, according to a trusted club insider.

ExWHUemployee, who is a reliable source of information in regards to the Hammers, shared via their personal Twitter account that the Whites were one of a number of Championship clubs looking to sign the 24-year-old right-back in this window.

Notts Forest are among a number of Championship clubs looking to sign/take on loan Sam Byram. His former club Leeds are said to be weighing up a deal plus a couple of others ⚒

The Sun previously claimed that Nottingham Forest were set to take Byram on loan for the season as Forest boss Aitor Karanka had jumped at the chance to secure the services of an experienced right-back this summer.

It’s unclear whether Leeds are looking to loan Byram or sign him on a permanent basis as ExWHUemployee suggests there are Championship sides considering both options. However whether it’s on a temporary basis or he is signed permanently Byram would be welcomed back to Elland Road with open arms. The right-back made 143 appearances for the Whites before joining West Ham with that move simply not panning out for him. Byram has had a terrible time at the London Stadium due to injuries and has been unable to prove that he is good enough for the Premier League in his outings. A move to Leeds would benefit all parties involved and hopefully get the defender back to his best in no time. While The Sun seem confident that Byram is on his way to Forest, until a deal is signed, sealed and delivered then the Whites have a chance of getting his services this summer. Also the 24-year-old would settle in quicker moving to a familiar setting.

In other Leeds United news, Whites keen on move for Newcastle 22-year-old, available for free in summer – report. 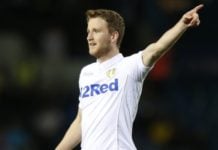