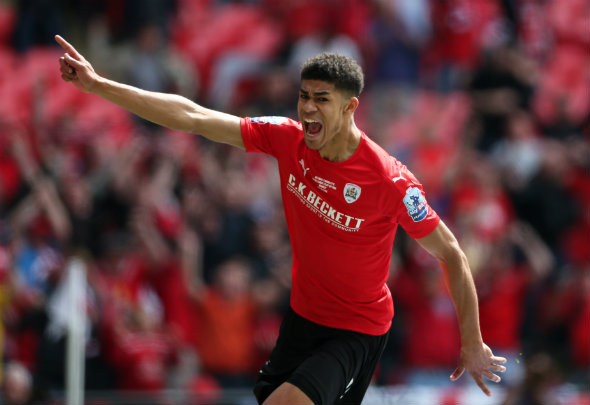 Leeds have indicated they will meet the £7,000-a-week wage demands of Manchester United striker Ashley Fletcher, according to a report.

The Sun claim the Yorkshire club are winning the race to sign the United teenager, who scored nine goals while on loan at Barnsley in 2015-16.

It is said Leeds owner Massimo Cellino is keen to beat off Championship rivals Wolves and Barnsley to the signing of Fletcher by offering a lucrative package.

Fletcher wants wages of £7,000-a-week and Leeds are willing to pay that in addition to a compensation fee for the forward, who is out of contract at the end of the month.

The Yorkshire Evening Post claim Leeds are increasingly hopeful of persuading Fletcher to leave United and join them next month after he rejected a new deal from the Premier League giants.

Leeds have been keeping a close eye on the 18-year-old striker over the previous weeks, although there is also interest from a number of Championship club after Fletcher’s starring role in Barnsley’s promotion from League One.

Cellino is thought to be open to a loan move or a permanent deal for Fletcher, but wants him at Elland Road next season either way after witnessing him score a second-minute opener in the play-off final.

United are entitled to compensation for Fletcher on account of his age and could return to him with an improved proposal but the forward is aware of the serious interest from Elland Road.

Fletcher signed his first professional contract at United in May 2014 but still awaits a first team appearance at the club.

The forward has also been involved with the national set-up, scoring a goal on debut after just 10 minutes for England’s Under-20 team.

In other Leeds news, target Kane Hemmings will not leave current club Dundee unless their valuation is met.