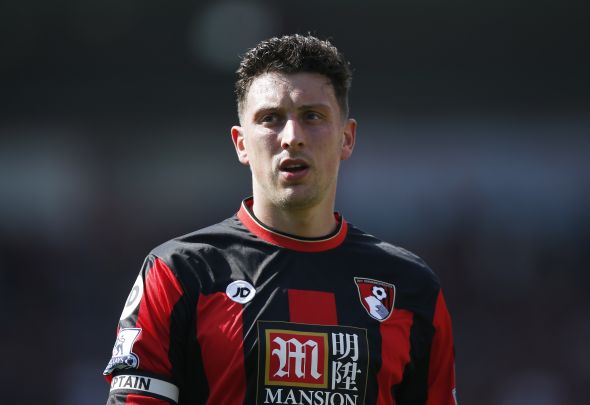 Leeds are ready to hijack Aston Villa’s swoop for Bournemouth defender Tommy Elphick, according to a report.

Football Insider reported earlier on Wednesday that Villa have had a £3million offer accepted for the 29-year-old Cherries captain and Roberto Di Matteo is hopeful of making the centre-back his first signing.

However, Yorkshire Evening Post reporter Phil Hay tweeted on Wednesday afternoon that Leeds still have hopes of derailing the deal.

He claimed that the Elland Road outfit are one of a number of clubs interested in Elphick but they have not yet tabled a formal bid.

Indications down south that Leeds are one of clubs interested in Bournemouth CB Tommy Elphick. No bid yet. Villa have had a £3m bid accepted

This came after the BBC reported that Elphick is expected to sign for Villa by the end of the week.

Elphick was an apprentice at Brighton and made his debut for them in 2005 before joining the Cherries in 2012.

He was hampered by an ankle injury in the recently completed domestic season and made only 14 appearances for the Premier League side.

Elphick captained Bournemouth to two promotions – from League One to the Premier League – in the space of three seasons.

Leeds are in the market for central defenders after releasing Scott Wootton, while Empoli are reportedly in talks to sign Italian Giuseppe Bellusci.

The fee for Bellusci is rumoured to be £1.6million, which would cover over half the fee required for Elphick.

New manager Garry Monk is yet to announce his first signing at Elland Road, but is looking at a number of strikers including Manchester  United’s Ashley Fletcher and Oxford’s Kemar Roofe.

In other Leeds news, a top-five club are chasing their striker after months of scouting.