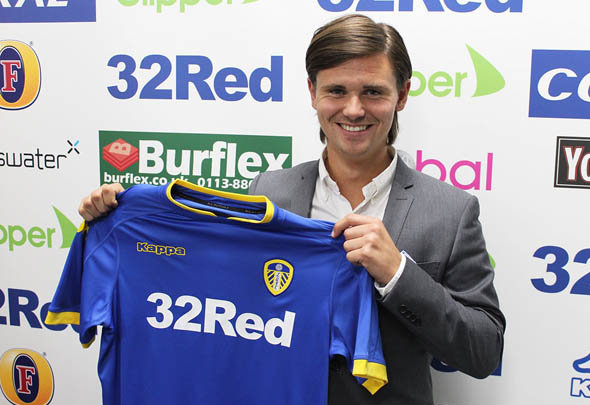 Marcus Antonsson’s former side Kalmar FF have made a move to sign the striker from Leeds, according to a report.

Football news website fotbolldirekt.se claim that the Swedish side have tried to bring their former man back to the club this summer, just a year after he left for the Championship.

The player himself has admitted that there has been interest in his signing this summer, but insists he is not looking to leave Leeds.

The 26-year-old struggled to break into the first team at Elland Road thanks to the impressive form of the league’s top scorer Chris Wood, managing to make 21 appearances across all competitions, scoring just three times and providing a solitary assist.

It was a long way away from the form he demonstrated at Kalmar, where he struck at a rate of more than a goal every two games, hitting home 25 times in 47 appearances.

Apart from Wood, Antonsson will also have to compete with Souleymane Doukara and Caleb Ekuban for a role leading the line for the Whites.

Antonsson has not completely ruled out a move back to Sweden this summer, but it has come across that he is reluctant to give up on his career in England after just a year. However, moving back to his former club, where there would be familiar surroundings, friends and team mates, might prove to be very tempting. As for Leeds, they need to make sure they recoup the majority, if not all the money they spent on him a year ago. Every penny counts this summer, with a fight for promotion to the Premier League lined up against several strong sides. If manager Thomas Christiansen believes the Swedish forward has a part to play, he should remain. Otherwise, a sale seems like the best move for all parties involved.

In other Leeds transfer news, this striker looks set for a move north of the border.