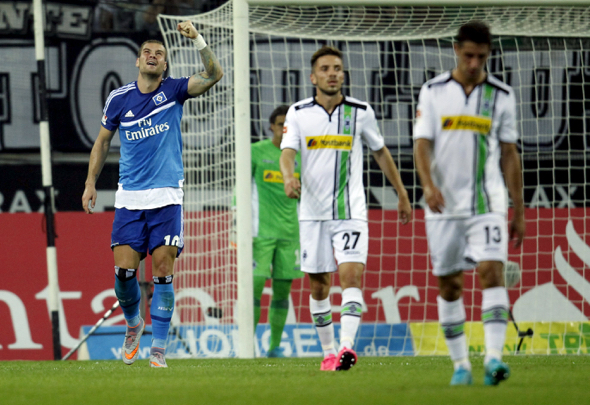 Hamburger SV striker Pierre-Michel Lasogga has packed his bags and is jetting into England to hold talks with Leeds, according to a reliable journalist.

Yorkshire Evening Post chief football writer Phil Hay claimed via his personal Twitter account on Monday that a move from the Elland Road giants was “very much on the table” for the 25-year-old German forward.

Passing through quickly – contacts in Germany say Lasogga to Leeds is very much on the table again. A genuine option. #lufc

Hay then followed up with a further Tweet stating that Lasogga was travelling to England alongside members of his family to discuss a transfer with Leeds.

Lasogga has travelled to England with members of his family to discuss a transfer. Hamburg want to move him on before deadline. #lufc

Lasogga is a proven striker in Germany and during his years in the Bundesliga he has bagged 34 goals in 128 matches in total for both Hamburger and Hertha BSC.

The powerful striker has since returned 30 goals in 107 matches for Hamburger and still has two years remaining on his contract.

However, he hasn’t played since a five-minute cameo in a May clash against Schalke, where he returned a goal.

Signing a Bundesliga striker will be a very good move for Leeds and could be the best piece of business that the club conducts this summer. Lasogga’s scoring record in the German top-flight is far from phenomenal. However, he has shown that he is very much capable of playing in a top-level league and at the age of 25 he has far from hit his peak. The Championship is also a considerable step down from the Bundesliga and if Lasogga is able to showcase his talents in England, as Felix Wiedwald has done when also making the same move then he could be key to helping Leeds win promotion.

In other Leeds transfer news, a reliable journalist has given a Whites transfer update on striker loved by Monk.