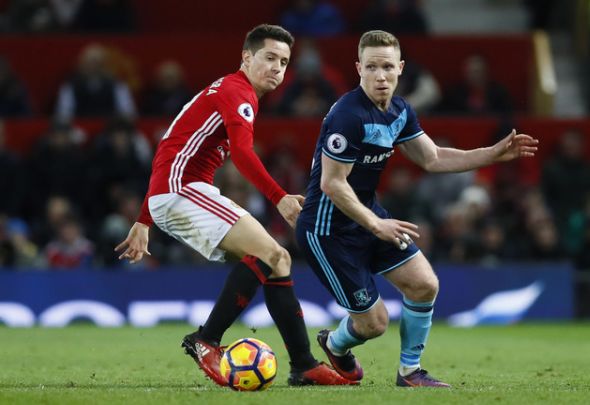 Leeds United are ready to match whatever Cardiff offer in the hunt to sign Middlesbrough midfielder Adam Forshaw, according to a report.
The Yorkshire Evening Post claims that Leeds are confident that Forshaw, 26, would rather move to the West Yorkshire club than to Wales so will let the player do the deciding in the race for his signature.
Football Insider exclusively revealed the Whites’ interest in Forshaw on Wednesday as Thomas Christiansen looks to bolster his central midfield options during the January transfer window.
It is now understood that Middlesbrough value the former Brentford and Everton player at £2.5million, a seven-figure fee which Cardiff, and therefore Leeds, are willing to meet.
The Yorkshire Evening Post adds that Bluebirds manager Neil Warnock is hoping to open talks over a swoop for the central-midfielder within the next 24 hours.
Forshaw is well down the pecking order at the Riverside and is yet to make a single appearance under new manager Tony Pulis.
The midfielder is a promotion expert and could be a great addition to the Leeds squad as they hunt a spot in the top six of the Championship this season.
He won promotion from League One as runners-up with Brentford in 2013/14 and then helped Boro into the Premier League in 2015/16 as Championship runners-up.
Football Insider verdict
Leeds are starting to feel the pressure on their central midfield. Eunan O’Kane is serving a three-match ban after an incident at Ipswich while Kalvin Phillips is one game away from a two-match booking. Ronaldo Vieira has also had his fitness concerns and the form of Mateusz Klich and Vurnon Anita is worrying to say the least. Forshaw is a steady performer who should be playing every week for a Championship club. He is cool, calm and composed and his impressive CV shows he would be a neat addition at Elland Road.
In other Leeds United news, this £1.5million Whites player is highly likely to exit Elland Road.
We’ve launched a << BREAKING NEWS FEED>> exclusively for your club. ‘Like Us’ on Facebook by clicking here if you want 24/7 updates on all Leeds United breaking news.