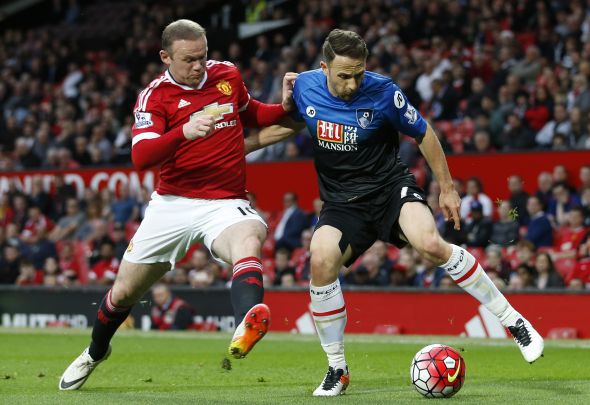 Leeds are set to rival Derby County for the signature of Bournemouth winger Marc Pugh, according to a report.

The 29-year-old has played just 38 minutes of first-team football this season in two appearances for Eddie Howe’s Cherries, and is desperate to start playing regular football again.

The Sun claimed in Wednesday’s paper edition (page 63) that Pugh’s availability had alerted Garry Monk’s side, and rivals Derby, as Leeds look to bring in competition for top scorer Chris Wood. Pugh has plunged down the striker pecking order at the Vitality Stadium, with Howe favouring the likes of Benik Afobe, Callum Wilson and Josh King.

A regular in Bournemouth’s meteoric rise from League One, Pugh was a mainstay of Howe’s side that reached the Premier League but now cuts a frustrated figure after revealing his desire to play more football.

“I don’t want to be there just to pick my wages up,” Pugh said, as quoted by the Sun. “I want to play week in, week out.”

That has alerted Monk, who is desperate to add more firepower to his Leeds strike force as he looks to return the Yorkshire giants to the top flight for the first time since their dramatic fall from grace in 2004.

Known for his versatility, Pugh is able to play on the flank as well as through the middle and could offer Monk more than just his goalscoring prowess.

The Cherries could be tempted to cash in on their out-of-favour attacker, as they risk losing him on a free when his current deal ends in just over 18 months time.

Pugh has scored 52 goals in 262 league and cup encounters for Bournemouth, and has provided another 46 in assists.

Pugh’s experience throughout the Football League would come as a priceless commodity to Monk’s side, who are desperate to bring in a forward who can share the goalscoring pressure on New Zealand international Wood. Leeds’ number nine has scored 12 goals in 22 games this season, but the next top scorer at Elland Road is Marcus Antonsson with three. The signing of Pugh would offer quality as a centre-forward, as well as providing an option from out wide for Monk. Howe could allow Pugh to leave in a cut-price deal from the Vitality Stadium, which would suit Leeds as they scout the market for a bargain.

In other Leeds transfer news, Monk will sign this international star in January.