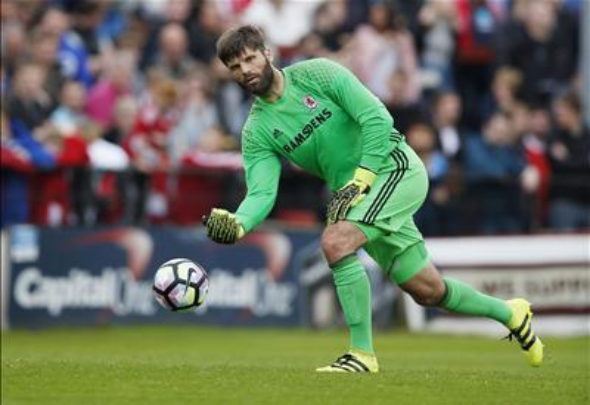 Leeds suffered a disappointing 2-0 defeat against Newcastle on Sunday which will be remembered for a calamitous mistake from goalkeeper Rob Green.

The 36-year-old made a hash of what should have been a simple catch as he dropped a floating ball and presented Dwight Gayle with the perfect opportunity to poke home the opener from close range.

The former England international has made a number of mistakes already this campaign, but with the equally vulnerable Marco Silvestri as the backup keeper, Green has been able to get away with his errors.

However, there are a number of shot-stoppers in the Premier League who aren’t having a lot of game time and could strengthen Leeds’ squad in the forthcoming transfer window.

The 28-year-old has lost his place in the Sunderland line-up to young starlet Jordan Pickford under David Moyes and he may be looking to leave in order to gain more pitch time.

The Yorkshire giants have also built up an Italian contingent at the club following Massimo Cellino’s takeover in 2014 and that could attract the experienced shot stopper to the team.

It was only in 2014 that Mannone was named the Black Cats’ Player of the Year and, after making just two appearances in the league this season, he could become available in the winter.

The 37-year-old would be a good short-term replacement for Green in goal and Monk could look to tempt him into a half-season loan in January.

The Greece international was vital between the sticks last season as Aitor Karanka’s men finished second in the Championship.

The keeper played in all 46 league matches, conceding just 31 goals and keeping an impressive 22 clean sheets.

However, since the club’s promotion, the north east side have added experienced duo Victor Valdes and Brad Guzan meaning that Konstantopoulos has become surplus to requirements this season.

The 29-year-old goalkeeper has only made two appearances in the EFL Trophy this season, keeping two clean sheets and he may be looking at his options away from Leicester.

The Premier League champions currently have Kasper Schmeichel and Ron-Robert Zieler as the first two names in their keeper pecking order.

However, Hamer does have a vast amount of Championship experience and would be an asset to a lot of teams in England’s second tier with 77 appearances and 21 clean sheets to his name with both Charlton and Bristol City.

In other Leeds transfer news, Championship rivals have joined the race to sign club’s star.