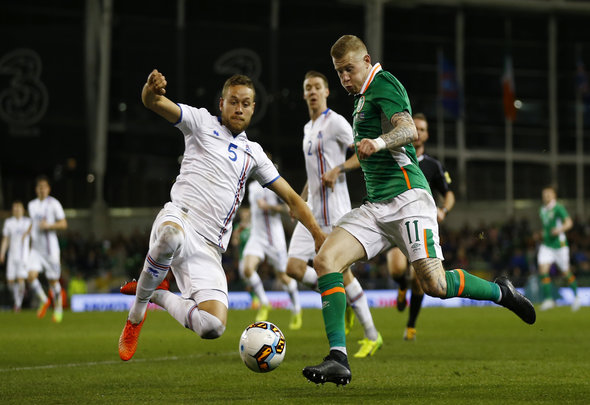 Leeds and Huddersfield are battling over the signature of Granada defender Sverrir Ingason, according to a report.

The Sun claim that the two Yorkshire clubs are both keen on the 23-year-old from the Spanish league and his contract means he could be available for a bargain fee.

It is understood that the Iceland international has a £2million release cause which was inserted when he signed for Granada in January.

The report details that both Leeds and Huddersfield are willing to meet the £2million valuation to bring him to English football.

The Whites manager Thomas Christiansen is believed to be a big admirer due to his extensive knowledge of European football, while the Terriers have been tracking him since his time at former club Lokeren in Belgium.

Ingason is a highly rated talent and earned a move to the Spanish top flight in January, where he became an ever-present in the starting line-up.

The centre-back linked up with English manager Tony Adams, but the pair were unable to prevent relegation from La Liga.

He is a member of the Iceland international side and did feature twice during their run to the quarter-finals in the 2016 European Championships.

Ingason has 11 senior caps for his country and scored three goals in return.

Leeds need to bring in a new centre-back to partner Pontus Jansson ahead of next season following the return of loanee Kyle Bartley to Swansea. The pair were phenomenal last season for the Whites and the club’s seventh-placed finish in the Championship was largely down to their defensive performances. Christiansen should certainly pull out all the stops to land Granada ace Ingason who looks to be a real talent. The 23-year-old may have suffered relegation from the Spanish top flight last year, but he didn’t join the cause until January and still put in some strong displays. He is a member of the Iceland squad and is someone that is only going to improve. Leeds’ only problem could be beating rivals Huddersfield to his signature as David Wagner’s side now have the appeal of Premier League football.

In other Leeds transfer news, they have to pay £5million to land their midfield target.