But the Championship leaders are set to lose out to Man United in the bid to prise the striker sensation, 16, from the Stadium of Light this summer.

A Leeds source has told Football Insider that the club have made a move for Hugill and offered him a professional contract ahead of his 17th birthday.

However, the bid is set to fail as Hugill has his heart set on a move to Old Trafford.

The highly rated young forward has agreed a initial scholarship deal with United that will converted into a professional contract when he turns 17 in October.

It is expected that the fee for the Black Cats academy product will eventually be settled at around the £300,000 mark given Hugill’s scholarship contract is about to expire.

It would be a blow to Leeds to lose out on such an exciting talent who has impressed their recruitment team during extensive scouting this season.

Hugill has demonstrated great promise in run-outs for Sunderland’s youth teams, most notably marking his Premier League 2 debut for the Under-23s in February with two goals against West Ham. 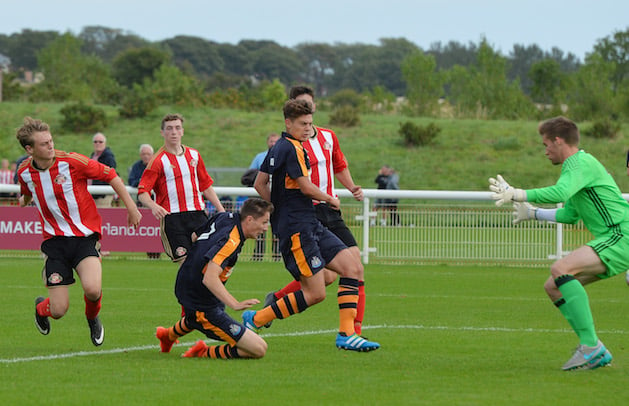 Leeds have invested heavily in their youth set-up since Andrea Radrizzani took over as owner in May 2017.

Manager Marcelo Bielsa has provided a clear pathway from the youth sides to the first team, with Jack Clarke – sold to Tottenham for an initial £9.5million last summer – and Jamie Shackleton the most notable successes.

In other Leeds United news, the Whites have been tipped to sign an “incredible” Premier League winner by a club ambassador after big-name manager “throws him under the bus”.