Noel Whelan has blasted the standard of defending from Celtic in Thursday’s 2-2 draw with Lille.

Speaking exclusively to Football Insider assistant editor Russell Edge, the former Leeds and Aberdeen striker has insisted the Hoops need to eradicate their “silly mistakes” at the back.

The Hoops had taken a 2-0 lead in France, courtesy of a double from Moi Elyounoussi, but were forced to settle for a point after goals from Zeki Celik and Nanitamo Ikone levelled the scores. 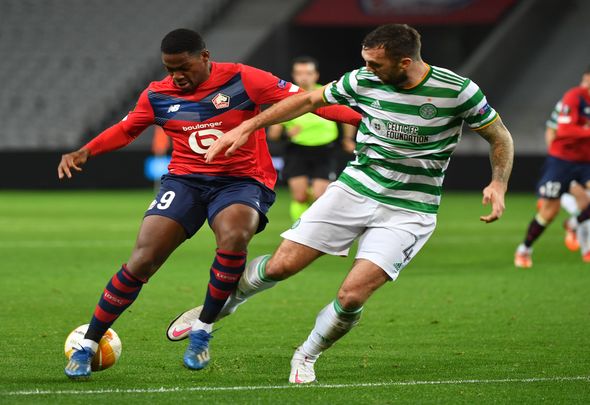 The draw means Celtic have now conceded at least two goals in each of their last four matches across all competitions.

Whelan has ripped into the Bhoys’ backline and admits he does not understand how they have managed to become so fragile in defence.

Whelan told Football Insider: “When you’re 2-0 up with 60-odd minutes to go, you’ve got to be feeling confident. Again, set pieces let the side down.

“One of the biggest Achilles heels for Neil Lennon and Celtic right now is getting these set pieces right. Conceding when you’re 2-0 up away from home against a very good Lille side, you’ve got to make sure you’re disciplined.

“I don’t understand and I’m sure Lennon’s scratching his head, because they’re a very big, powerful side, how this is happening. They’re silly mistakes – lapses of concentration, not clearing their lines – they’ve got to get that right.”

Celtic had kept four successive clean sheets prior to the 2-0 defeat at home to fierce rivals Rangers.

The Bhoys’ next game sees them take on Aberdeen on Sunday for a place in the Scottish Cup final.

In other Celtic news, McAvennie baffled by Leigh Griffiths development at Parkhead.