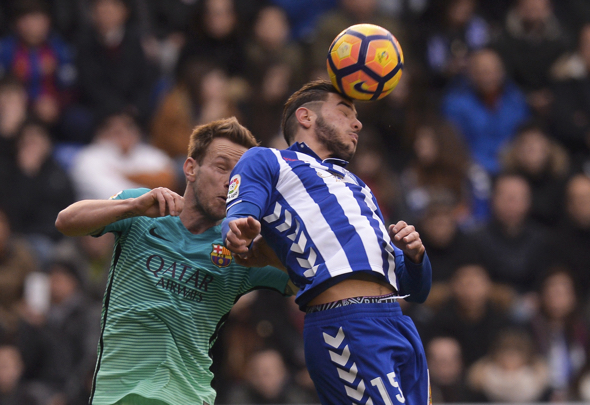 Liverpool have been dealt a blow in their pursuit of 19-year-old left-back Theo Hernandez after it was revealed Real Madrid and Barcelona have both made offers, according to a report.

French football news website Foot Mercato report that the agent of Hernandez has confirmed that both of the Spanish giants have made “concrete offers” to meet the French defender’s release clause of €24m (£20.2m)

The Independent claim that Liverpool have been scouting the defender as they look to find a natural left-back to replace stand in defender James Milner, himself replacing out-of-favour Alberto Moreno.

Hernandez, whose brother Lucas is also at Atletico, has spent the season on loan to La Liga side Deportivo Alaves, making 36 appearances across all competitions for the tenth placed side.

Hernandez’s agent, Manuel Garcia Quilon, says that the final decision will lie in the player’s own hands.

News that Barcelona and Real Madrid are already making inroads to secure Hernandez’s signature will feel like a hammer blow to Jurgen Klopp. The 19-year-old is a highly regarded talent and with a release clause in his contract, would not break the bank. However, competing with the Spanish giants is another matter for Liverpool, who just do not hold the same pedigree. They may be able to convince him with the guarantee of first team football, but at such a young age, the thought of playing at the Santiago Bernabeu or the Camp Nou might be too tempting.

In other Liverpool news, Football Insider analysed the three worst players from their draw with the Saints.