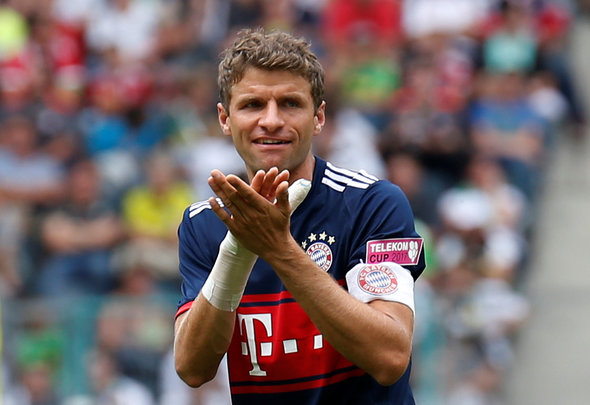 Liverpool and Arsenal are two of four teams in a race to sign Bayern Munich attacker Thomas Muller, according to a report.

German newspaper Bild claims on their website that Chelsea and Serie A champions Juventus are also keeping close tabs on the 27-year-old, who is understood to have fell down the pecking order following James Rodriguez’s move to the Allianz Arena from Real Madrid.

It is understood that Liverpool manager Jurgen Klopp is very keen on adding the 2014 World Cup winner to his squad this summer.

However Bayern Munich president Karl-Heinz Rummenigge has declared that Muller, who has won six Bundesliga titles at the Bavarian giants, is going nowhere.

“Thomas is still not for sale because it fits perfectly to FC Bayern. Furthermore, there is no discussion,” he said, as quoted by Bild.

Muller has spent his entire career at Bayern, making 395 appearances for them in all competitions.

He has regularly been among the goals and played a key part in their 2013 Champions League triumph at Wembley.

The versatile attacker, who can play as a striker, in a No 10 role or on the right wing, scored nine goals and supplied 17 assists in 42 appearances for Bayern across all contests last season.

Muller would be an amazing addition to both the Arsenal and Liverpool squads, but it’s also completely ridiculous to think that they could pry him away from a team that is arguably one of the strongest in the world. Muller should keep his place in the team over Rodriguez and also has a good shout of playing on the right wing with Arjen Robben reaching the climax of his career. Liverpool and Arsenal have already spent big this summer and it would probably take a near-world record bid to land Muller. It’s perhaps more likely that he would join Juventus instead of the three Premier League clubs chasing his signature as he would have a better chance of lifting the Champions League with the Serie A champions.

In other Liverpool news, the Reds have accepted offers from three clubs for this highly-rated attacker.