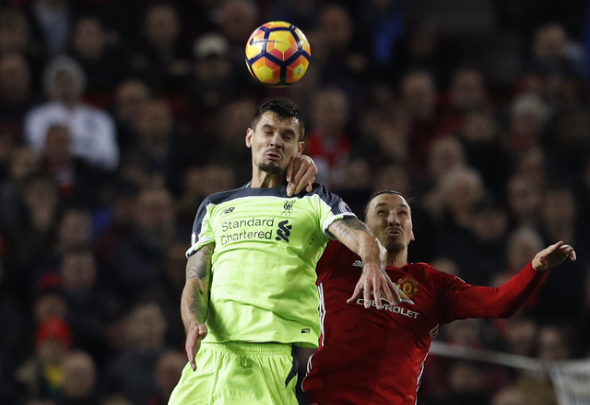 Liverpool defender Dejan Lovren is set to make his long-awaited return from injury on Saturday, according to Jurgen Klopp.

The Liverpool chief revealed to The Express that the 27-year-old is expected to train with the club on Saturday, for the first time since his injury lay-off at the start of the month, and could be back in contention to face Leicester on Monday.

Lovren sat out of Liverpool’s last two Premier League matches against Hull and Tottenham, and was also forced to miss the club’s training camp in La Manga last week.

Instead, the Croatia international flew out to Germany to see a specialist about a persistent knee injury, but Klopp has confirmed that it is not a long-term concern.

He told The Express: “Dejan Lovren couldn’t join us [at La Manga], but he was running today and felt good, he could take a few more steps in the right direction.

“There’s no long-term concern about his knee. He should be training tomorrow.

“He will be very, very close for the Leicester game.”

His return will come as a significant boost to Liverpool fans, who have often seen their side struggle defensively throughout the season.

In his absence, Klopp was forced to field versatile midfielder Lucas Leiva as an emergency centre-back, which despite its success in the recent victory over Tottenham, is far from the long-term solution needed to halt their ongoing problems.

Lovren will be a crucial asset to Liverpool over the final few months of the season, with the Premier League now the sole focus of their attention.

Klopp also revealed that Daniel Sturridge was back in training. The England international was sent home early from the Spanish training camp with a virus.

Midfielder Georginio Wijnaldum, meanwhile, has also been nursing a knock, but could still play a part in Monday’s clash with struggling Leicester.

In other Liverpool news, the club are reportedly set to push through this £50million deal.