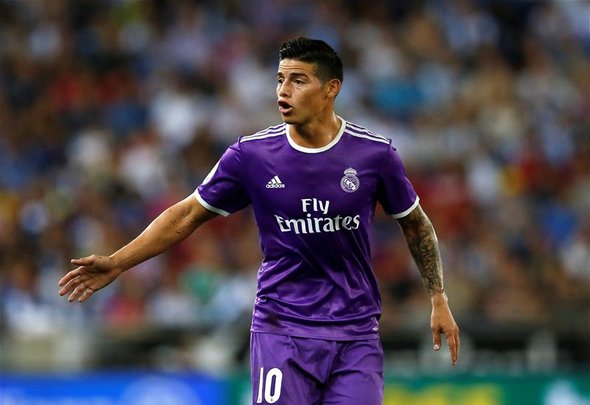 Liverpool FC are interested in using the Philippe Coutinho money to bring the Colombian international James Rodriguez to Anfield, according to a report.
The Spanish tabloid paper Don Balon report that Jurgen Klopp is interested in signing the 26-year-old, who is on a two-year loan spell at Bayern Munich.
The report states that Klopp regards Rodriguez as the perfect replacement for Coutinho, and have made contact to try to sign the midfielder in the Summer.
Don Balon report that Real Madrid, Rodriguez’s parent club are regretting the two-year loan, and would have liked to cash in from the growing interest this summer.
Bayern Munich will be unwilling to allow the Colombian international to leave early, having featured heavily this season for the German giants.
However, Liverpool’s hopes of signing Rodriguez have been boosted by the fact that competition for places at the Alianz Arena will grow, as it is expected that Leon Goretzcka will join once his contract expires at Schalke.
Football Insider verdict:
James Rodriguez would fill the void left behind by Philippe Coutinho should Jurgen Klopp manage to land him. The Colombian is severely passionate about the game, and brings with him a winning mentality that he is used to, having spent time with Real Madrid and now Bayern Munich. Rodriguez creates chances, and has a wonderful ability for socring tremendous goals, who can forget that worldie in Brazil. Klopp will have an increased chance of signing him, should Bayern allow him to leave his loan spell early.
In other Liverpool transfer news, it has been confirmed today that this highly rated attacker will not be leaving Anfield this january.
We’ve launched a << BREAKING NEWS FEED>> exclusively for your club. ‘Like Us’ on Facebook by clicking here if you want 24/7 updates on all Liverpool breaking news.