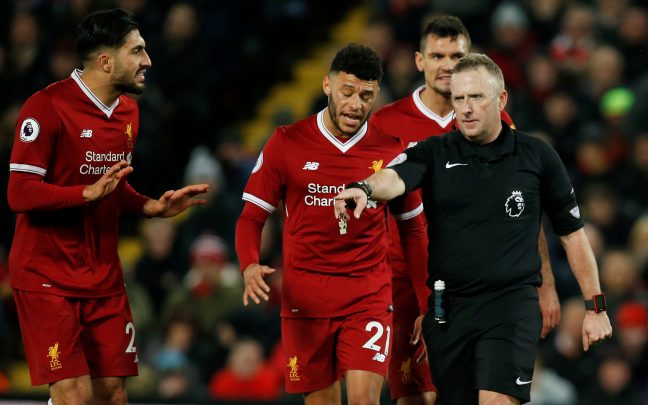 Liverpool midfielder Alex Oxlade-Chamberlain will be lucky to play for the Reds again in 2018, according to a club insider.

DaveOCKop, a reliable source of information on all things Liverpool, claimed on Twitter to have been informed of the gruesome details of the Ox’s injury and wrote on his official feed: “Told that as well as damaging his cruciate ligament, Alex Oxlade-Chamberlain also damaged his medial ligament and his hamstring was also damaged when it came off the bone. Would be amazed to see him play in 2018, unfortunately.”

Told that as well as damaging his cruciate ligament, Alex Oxlade-Chamberlain also damaged his medial ligament and his hamstring was also damaged when it came off the bone. Would be amazed to see him play in 2018, unfortunately.

It’s a huge blow for the club and for the player himself.

Since joining Liverpool from Arsenal last summer the player who reportedly earns £120,000-a-week at Anfield has enjoyed something of a revival under Jurgen Klopp and as such the fans have taken to the forward-thinking midfielder.

Injuries blighted the Ox’s time at the Emirates, but after making 35 outings for the Reds this season, it had looked as though all that was behind him until the knee problem sustained in the first-leg against Roma.

After hearing the news, Liverpool fans who are readying themselves for the Champions League final against Real Madrid were having to deal with the news on social media.

Here is a selection of reactions on Twitter after supporters caught wind of the news:

Gutted for him, need to invest even more now!!! 🔴 need depth

In other Liverpool news, goalkeeper heads to Liverpool from eighth-placed club with double deal on the cards – report.