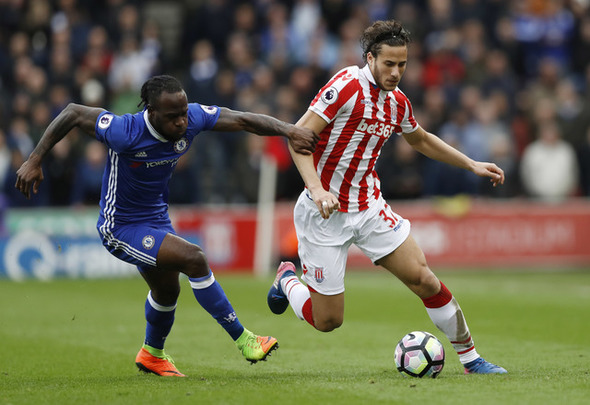 Stoke attacker Ramadan Sobhi is being discussed in the Liverpool boardroom in regards to a possible move, according to a report.

Football news site Bleacher Report have claimed that the Merseyside giants are big admirers of the the 20-year-old left-winger and may sound out Stoke about the possibility of a deal.

It is reported that the Reds’ pursuit of Julian Brandt seems to have hit a stumbling block and Jurgen Klopp’s side are now having to look in to other options.

It is understood that Sobhi is one of those players and the Liverpool hierarchy are said to be discussing a potential move for him.

He has since played in 17 matches in total for the Midlands club, returning just two goals.

His displays are said to have caught the eye of Liverpool, who are currently playing with star Philippe Coutinho on their left-wing.

Klopp may be looking to add more depth to his attack this summer and Sobhi’s age and potential could see him as the perfect signing for the German manager.

However, the 16-time capped Egypt international is still contracted to Stoke until 2020, meaning he may not be easy to purchase.

Sobhi has shown very little in his debut Premier League season and whatever the Liverpool chiefs are seeing in him may be different to everybody else. However, the player does still have time to grow and he could become the player that Stoke looked to have signed last summer. But, the Reds have made a number of poor signings in previous windows in regards to signing players with potential such as widely regarded flops Ryan Babel and Andy Carroll and the club may be better steering clear of Sobhi and going for someone more proven, even if it is to sit behind Coutinho in the team. If the Brazil international suffers an injury next season then Liverpool will need someone of his quality to come into the team, especially if they are still in the Champions League.

In other Liverpool transfer news, this 66-time capped defender interesting the Reds has held a meeting with European giants.