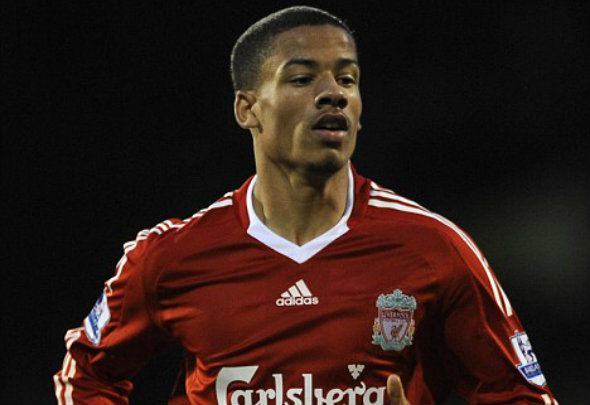 Former Liverpool youth star Nathan Eccleston is playing for Hungarian side Bekescsaba seven years after he made his debut against Arsenal.

Eccleston was once one of Liverpool’s brightest academy prospects and made his competitive bow in the League Cup at just 18 in 2009.

The striker struggled to live up to his early hype and left Liverpool in 2012 in search of first team action.

After spells at Blackpool, Partick Thistle and Kilmarnock, Eccleston is now on the books of the Hungarian League’s bottom club, Bekescsaba.

“I did some research on Google and looked up the team to see what I could find out about them, and it was better than the other options I had at the time, so I thought ‘why not?’ said Eccleston speaking to ITV.

“When I Googled it I didn’t check where it was on the map, to be honest; I checked about the club, players and ground but didn’t see where it was, so it was a bit of a surprise when I got off the plane at Budapest and had to drive for maybe three hours.”

The striker’s stand-out Liverpool moment is not the best of memories for Reds’ fans.

The 25-year-old missed a penalty in Liverpool’s infamous League Cup shoot-out defeat to Northampton in 2010.

Eccleston scored his first goal in a rare win for Bekescsaba a week ago and revealed that he came close to quitting football altogether after failing to make an impression at the game’s highest level.

“It got to the stage with me and football where it wasn’t making me happy; I’d train Monday to Friday and it would come to the weekend and I wouldn’t always start so my game time wasn’t regular, which was frustrating,” said Eccleston.

“There were times where I was under contract at Blackpool and my two previous clubs where I considered not playing and that’s coming from the heart.

“I was there doing something I loved but at the end of the week I wasn’t playing.”

Eccleston is the only Englishman at the club and one of just six foreigners in the squad.

However after spending seven months without a competitive start, Eccleston is finally beginning to rediscover his love for football.

The former Blackpool player said: “I’ve come here to play here to play football, as once you’re not playing no amount of money can bring you that feeling that football brings you, the feeling you had as a kid on the park.”

In other Liverpool news, Mario Gotze has hinted he might be open to move to Merseyside in the summer.