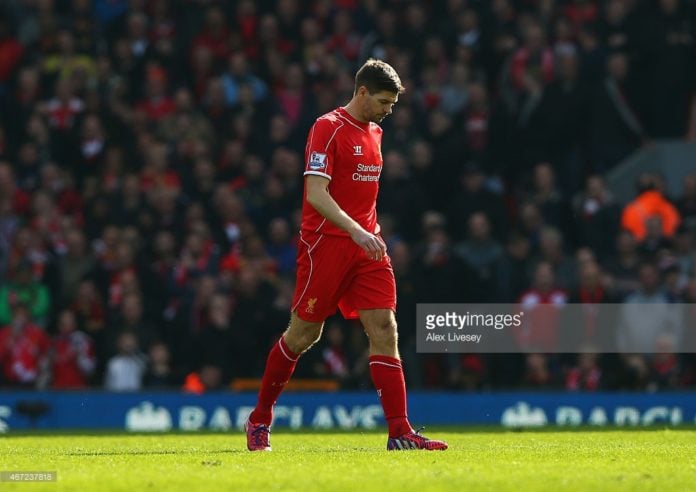 By Merseyside correspondent Cam Downes
Steven Gerrard has revealed he was offered a one-year contract extension by Liverpool with a 40 per cent pay cut before he called time on his career at the club.

Talks between the Anfield icon and Liverpool chief executive Ian Ayre last November over one final deal lasted just 15 minutes.
Gerrard, whose £140,000-a-week contract was due to expire at the end of the 2014-15 season, said he was underwhelmed by the £84,000-a-week offer on the table from the Merseysiders and felt that the club owners Fenway Sports Group were not as keen for him to stay as manager Brendan Rodgers.

“The offer was a one-year extension with a 40 per cent pay decrease,” Gerrard told the Daily Mail in a serialisation of his new autobiography. “The bonuses were very good but they contradicted everything that Brendan had told me. My game time was going to become less and less but they were offering performance-related incentives?

“I had no quibbles with the money offered. A substantial decrease was only to be expected. At 34 I was not the player who had lifted the Champions League trophy 10 years earlier. I also understood that I would have to play less — but I still valued myself as a top player and an important part of the team.

“I was still captain and I was disappointed to be offered a performance-incentive contract. I thought they would have known that, apart from pride in my own performances and an enduring love for Liverpool, I didn’t need any incentive to try my heart out.”

Gerrard, who ended his 27-year association with Liverpool in June to join LA Galaxy, wanted a player-coach role.

He wrote: “In a perfect scenario, Liverpool could have offered me a one-year deal which included the chance to make a transition to the first-team staff. A year with Brendan and his staff would have been an invaluable experience — which players like Ryan Giggs, Phil Neville and Garry Monk had enjoyed at other clubs.
“Brendan Rodgers wanted me to stay but the club’s offer suggested ‘it feels like it’s time. Enjoy your last six months with us and then start afresh somewhere else’.

“The meeting to discuss a new deal lasted 15 minutes — a very short time to decide the conclusion to my Liverpool career after 27 years.

“It was pretty much a case of ‘this is the offer’. It seemed as if I wanted them more than they wanted me.”