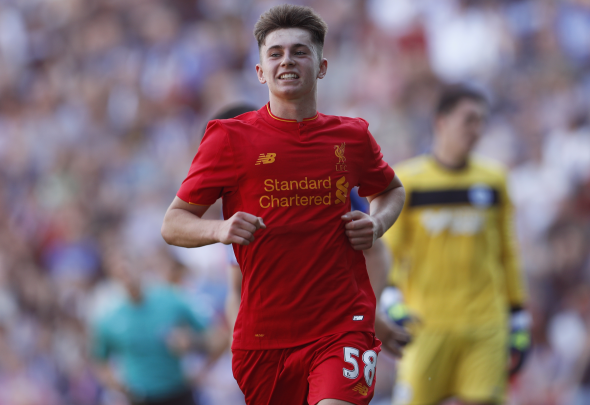 Liverpool youngster Ben Woodburn has sent a message to Liverpool manager Jurgen Klopp claiming he would like to have more opportunities with the first team next season.

The youngster was voted as the Academy Players’ Player of the Year at the club’s official end of season awards’ ceremony on Tuesday night.

The 17-year-old announced himself to the Anfield faithful in the EFL Cup match against Leeds United in November as he scored his first ever goal for the club in only his second appearance in the senior team.

It was a historical goal as Woodburn became Liverpool’s youngest ever goalscorer.

The young striker was part of the Liverpool Under 23 side that finished the season in third place behind Manchester City and champions Everton.

Speaking to the Liverpool Echo after a 2-1 win at Goodison Park, Woodburn expressed his desire to see more first-team action next season.

“I think it has been a good season for me and hopefully next season will be just as good if not better,” Woodburn said.

“I’ve had a taste [of first-team action] and like everyone would do I just want as much as I can of it.

“It is obviously different and a big step up but the first team lads made it so much easier for me. They are so good with all the young kids and they made it feel normal.”

It’s going to be a tough task for the youngster to break into the first team –Liverpool haven’t had a lot of problems in front of goal this season, scoring a total of 71 goals so far in the Premier League.

The Merseyside club still have a chance to add to this tally as they travel to the London Stadium on the weekend before playing Middlesborough at Anfield on the final day of the season.

In other Liverpool news, the board are discussing a move for this 20-year-old Premier League attacker.