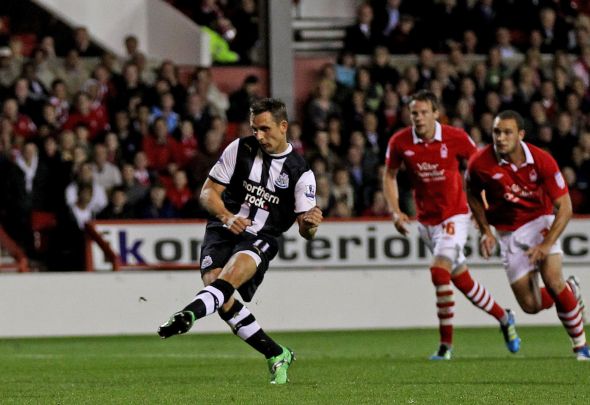 Peter Lovenkrands has hailed hat-trick hero Dwight Gayle as he put Norwich to the sword in a spectacular 4-3 victory.

Wednesday night’s clash of the two promotion favourite provided a classic as the Toon came from 3-2 down to secure the three points in injury time as Gayle struck a left-footed shot past goalkeeper Michael McGovern in the 96th minute.

Former Newcastle man Lovenkrands hailed the former Crystal Palace striker on his personal Twitter account, after Gayle had lifted his tally for the season to seven goals in nine games.

Wow!! Brilliant Gayle!!! What a game @NUFC come on #ToonArmy

The top-of-the-table Championship clash came to life in the second half, as Alex Neil’s canaries went 3-1 up before the Toon reeled them in to secure a fantastic three points and close the gap at the top to just three points.

Gayle, who moved to Newcastle this summer from Alan Pardew’s Palace for £10million, has implemented himself as Rafa Benitez’s first-choice striker over the likes of Aleksander Mitrovic and Daryl Murphy.

Newcastle will be looking to keep the pressure on league leaders Huddersfield this Saturday, as they travel to face struggling Rotherham.

Former Denmark international Lovenkrands retired in 2014 after finishing his career with Birmingham. The 36-year-old made 85 appearances with the North East outfit and found the back of the net 29 times in league and cup encounters during his three-year stay with the club.

In other Newcastle news, Alan Shearer has congratulated this star an after an impressive performance against Norwich.