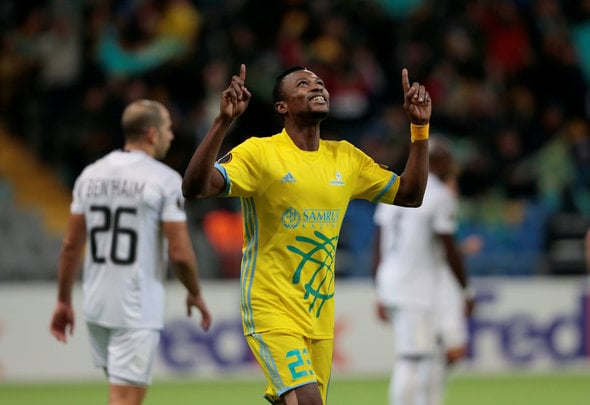 Celtic could make a “lucrative” move for Astana attacker Patrick Twumasi when the transfer window re-opens in January, according to a report.

Ghanaian news outlet Ghanasportsonline.com claims that Hoops manager Brendan Rodgers is a big fan of Twumasi, 23, and has the Astana star in his sights ahead of the upcoming transfer window.

It is understood that a Celtic move for Twumasi is on the cards, with there being a chance that the Scottish champions may submit an offer for him in January.

Twuamsi has been on hot form for Kazakhstan side Astana this season, especially in Europe where he has scored a stunning nine goals in 11 appearances across both the Europa League and Champions League.

Two of the goal machines’ strikes even came against Celtic in a Champions League qualifier game which was won 4-3 by his side after losing the first leg at Parkhead 5-0.

Since dropping into the Europa League, the three-times Ghana international has continued his goal scoring rampage, netting four in his last three outings in the competition.

Twumasi looks like a really good talent and the fact that he is consistently scoring in Europe should definitely attract some attention. However Celtic do not need more attacking players, especially wingers like the Astana star. The Bhoys are inundated in that area of the squad to the point where summer signing Jonny Hayes has barely played this season. Rodgers needs to sort out his defence before anything else. Another centre-back is needed and the Northern Irishman has also admitted he may be looking for a right-back in January to add extra strength in depth. Twumasi could be an option at the end of the season when Patrick Roberts returns to Manchester City, but he isn’t needed right now.

In other Celtic news, Hoops fans raved about one player on Twitter for his performance in the 7-1 defeat against PSG – but it wasn’t Moussa Dembele.