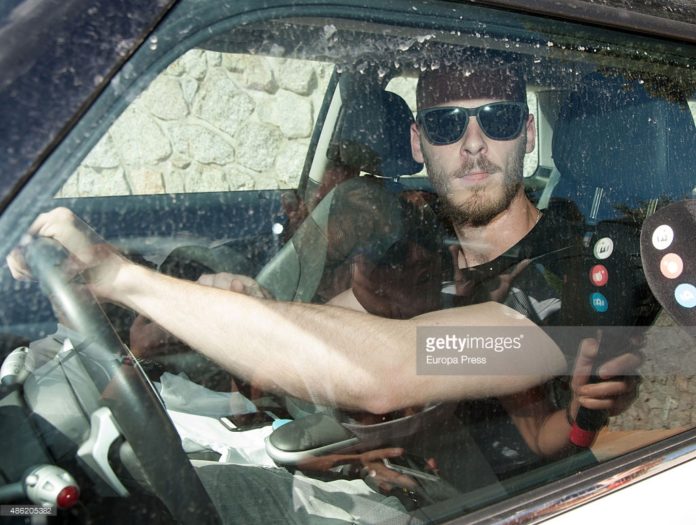 The 24-year-old Spain international has put pen to paper on a new deal, which includes an option for a fifth year.
It represents a remarkable turnaround just days after De Gea’s £29million move to Real Madrid collapsed due to the paperwork not being submitted in time.
“I am delighted to be starting this new chapter in my United career,” said De Gea. “I’m looking forward to putting a difficult summer behind me and working hard.
“Manchester United is a special club and Old Trafford is an ideal place for me to continue to develop.”
Football Insider revealed on Thursday that De Gea had reached an agreement in principle with United to sign a new contract following talks involving his agent Jorge Mendes and club officials at the club’s Carrington headquarters.
Manager Louis van Gaal said he was “very pleased” the goalkeeper “will be part of the team for many years to come”.
“David made a very important contribution to our performance last season and he has been the club’s Player of the Year for the last two seasons,” added the Dutchman.
De Gea has made 175 appearances for United since joining the club from Atletico Madrid in 2011 in an £18.9m deal but he has not played for United this season as Van Gaal felt he could not focus amid interest from Real.
The 24-year-old and his entourage, including his family and Mendes, are convinced that the blame for the failure to submit the paperwork by the deadline rested with Real officials rather than their United counterparts, which has contributed to his change of heart.
The De Gea contract announcement comes after he rejected several contract offers from the Premier League club last season and informed them that he wanted to return to his homeland and join Real.

However, United have launched a charm offensive to keep De Gea out of Real’s clutches and persuade him to change his mind about his future plans.
Talks have taken place between the goalkeeper, manager Louis van Gaal and goalkeeping coach Frans Hoek over the past 10 days to repair their relationships, which had been damaged by the transfer saga.
De Gea was left out of the United team for their opening six matches of the season but has been assured that he will be reinstated to the starting line-up if he is fully focused.