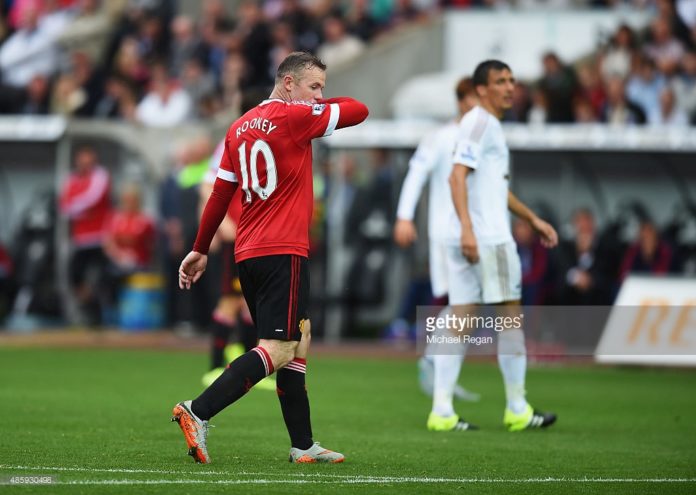 By Manchester correspondent Alex Stevens
Wayne Rooney has been left out of the Manchester United squad that faces PSV Eindhoven in the Champions League on Tuesday night.

England’s record goal-scorer will miss a second consecutive United match with the hamstring problem that forced him out of Saturday’s 3-1 win over Liverpool.
Manager Louis van Gaal said after the Liverpool clash that Rooney was a doubt for the PSV fixture and, after assessing him on Monday morning, has decided that he will not be risked.
Teenager James Wilson, who is in talks to join Derby on an emergency loan, has been drafted into the 20-man squad to face the Dutch club. Andreas Pereira has also been named in the travelling party.
Rooney United skipper is eyeing a return against Southampton in the Premier League on Sunday.
Van Gaal must now decide whether to stick with Marouane Fellaini as an emergency striker against PSV, or give a first start to Anthony Martial.
The £58million summer signing lit up Old Trafford on his debut on Saturday, when he came off the bench to score United’s match-clinching third goal.
Fellaini, who is usually used in either attacking or central midfield, had struggled to offer much as the spearhead of the attack.
The latest Manchester United news is that the following squad will take on PSV: De Gea, Romero, Darmian, Smalling, Blind, Shaw, Rojo, McNair, Valencia, Carrick, Schweinsteiger, Mata, Herrera, Depay, Fellaini, Schneiderlin, Martial, Young, Wilson, Pereira.