Brazilian winger Gabriel Martinelli is undergoing a trial at Manchester United ahead of a possible transfer.

The Premier League giants confirmed on their official website that the wide attacker, 16, took part in their youth team’s 2-0 win against Lincoln City Under-18s on Wednesday night.

Martinelli played the final 30 minutes of the Sincil Bank clash after coming off the bench for Nishan Burkart to make a good impression in front of 2,240 supporters.

Both of United’s goals were scored while the starlet, who is currently at Brazilian club Ituano, was on the pitch as the visitors made their dominance count.

Martinelli has been invited back on trial ahead of the 2017-18 campaign after a previous spell last season in which he was given a chance to impress the club’s coaches.

In the club’s senior set-up, the title challengers have secured the landmarks signings of striker Romelu Lukaku and defender Victor Lindelof. 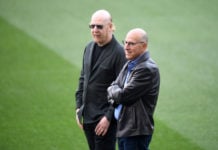