The former Scotland international, speaking exclusively to Football Insider correspondent Dylan Childs, called the second-half switch to move the 23-year-old to full-back a “masterstroke” by the manager.

It was a difficult start for Steven Gerrard’s side in the first leg of the Europa League Round of 32 tie, with Braga taking an early lead through a fierce strike from Fransergio. 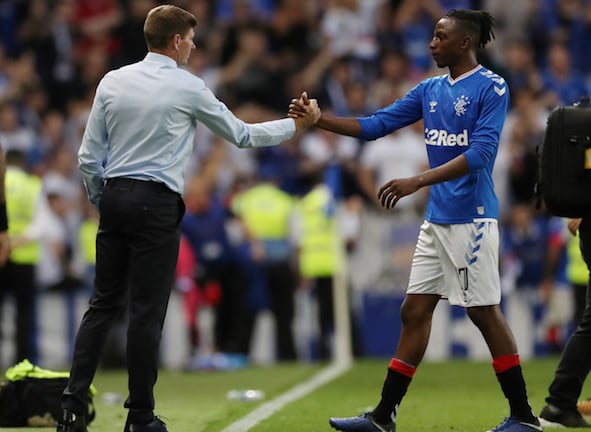 Aribo came on for Glen Kamara shortly after the break but saw Braga net their second just minutes later, the midfielder moved to left-back when Greg Stewart replaced the injured Borna Barisic in the 73rd minute.

The natural midfielder netted the equaliser minutes after and Hutton suggested that the injury to Barisic was the catalyst for the comeback.

“It was a masterstroke,” the former Gers defender told Football Insider.

“He made some great runs and had some moments of individual brilliance – especially the goal. Aribo had great feet.”

“It was from that moment onwards that things really seemed to change. He made marvelous runs down the left-hand side and we all know he has got really good ability.

“It was a great substitution from the manager.”

🚨 Who knew that @J_Aribo19 is in fact the worlds greatest left-back?

Ianis Hagi scored either side of the equaliser to seal a 3-2 victory and cap a memorable European night at Ibrox.

The Teddy Bears will travel to Portugal next Thursday for the second leg of the fixture.

In other Rangers news, Kevin Phillips has told Football Insider he “loves” what he sees from forgotten man.