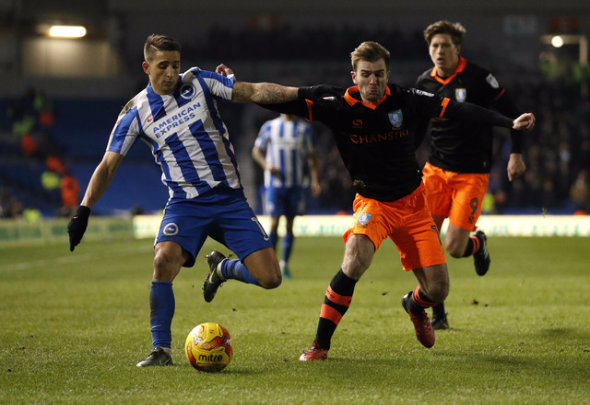 Sheffield Wednesday winger Callum McManaman has labelled his side’s clash against Leeds on Saturday as a “massive game.”

The two Yorkshire giants are currently preparing to face each other at Elland Road this coming weekend.

The two promotion chasers are only separated by goal difference in the Championship as they occupy fifth and sixth respectively.

Now, McManaman, who was reflecting on his side’s Tuesday defeat on his personal Twitter account, has highlighted how big the weekend’s clash is.

Leeds are currently going through a poor run of form with just one win from their last four Championship matches.

Meanwhile, Wednesday have won four of their last five games in the league, but their 2-1 defeat against Brentford on Tuesday has certainly brought their good run crashing down.

When the two sides last met in August goals from Marcus Antonsson and Chris Wood gave Garry Monk’s side a 2-0 win at Hillsborough.

Now, Leeds fans will hoping for the same outcome as they aim to finish in the play-offs with 13 matches of the season still left to play.

With seven points currently separating both clubs from seventh placed Norwich it will certainly be a game where both sides will be gunning for three points.

In other Leeds news, Alfonso Pedraza sent this motivational Twitter message to fans on Tuesday.