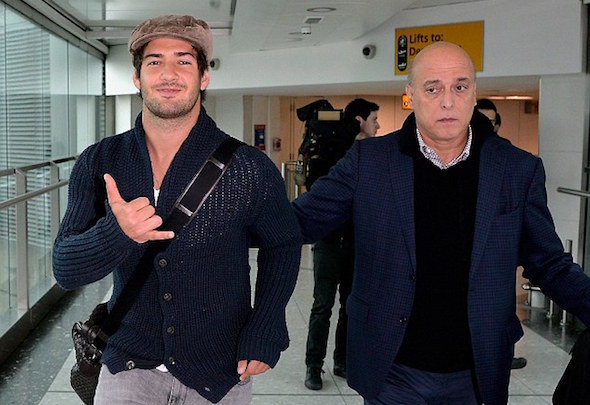 Alexandre Pato has passed a Chelsea medical as he puts the finishing touches to his loan move to the club, Football Insider sources understand.

Pato arrived in London on a flight from Brazil and underwent a Stamford Bridge medical on Wednesday afternoon after agreeing the terms of a loan transfer until the end of the season.

The former AC Milan striker landed at Heathrow at lunchtime on Wednesday after an 11-and-a-half-hour journey from Sao Paulo and said it was a dream move.

Asked how he felt, Pato said: “So happy, so happy, I stay here for my dream. Chelsea is my new home. Thanks Chelsea for the support. Thank you for my fans.

“I need to play I need to… I don’t know what to say because I am so happy today.”

Speaking to Sky Sports in English, he revealed his nerves ahead of the move to the Premier League Champions.

“I am very anxious,” Pato explained. “I want to know my new friends, new players, friends in the team. I’m really happy to play for Chelsea.”

In other Chelsea transfer news, the club are in advanced talks to sign defender Matt Miazga from New York Red Bulls for £3.5million.