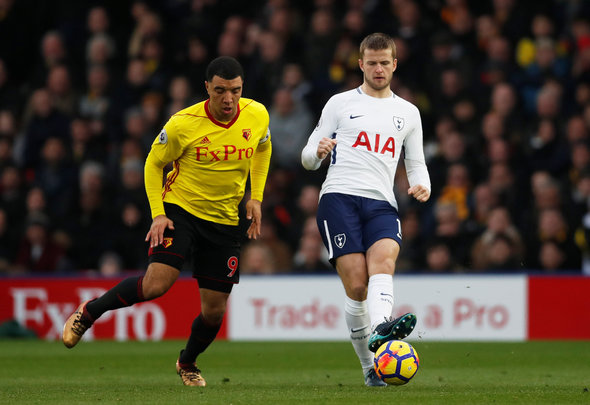 Spurs could not handle City’s quality as Pep Guardiola’s side reached their rampant best, and they now sit in seventh ahead of a crucial clash with Burnley on Saturday evening.

Sky Sports pundit Merson has highlighted the selection of Dier at centre-back as one of the reasons for Tottenham’s performance, and said that Spurs were never going to win the game with Mauricio Pochettino’s tactics on the day.

Speaking in his column for the Daily Star, Merson said: “I looked at that Spurs line-up and gave them no chance. You can’t win at City with Eric Dier at centre-back. He’s too casual. He’s a good holding midfielder but a very average centre-back.

“They are really missing the injured Toby Alderweireld, because he’s the best defender in the world for me. And without Victor Wanyama, they had nobody to win the ball back.

“I’m not surprised they lost. They were never going to win with that team.”

Dier had been reinstated as a holding midfielder this season after spending a lot of time in defence last term due to  the arrival of Wanyama from Southampton, but the injury to Alderweireld has seen him play centre-back once again for Spurs in recent games.

The 23-year-old looked good against Brighton the week before as Spurs ran out 2-0 winners, but was shaky against City, and gifted them their fourth goal after failing to clear a simple long ball.

In other Tottenham Hotspur news, Jermaine Jenas has urged Daniel Levy to get out the cheque book and sign this star to a new deal.