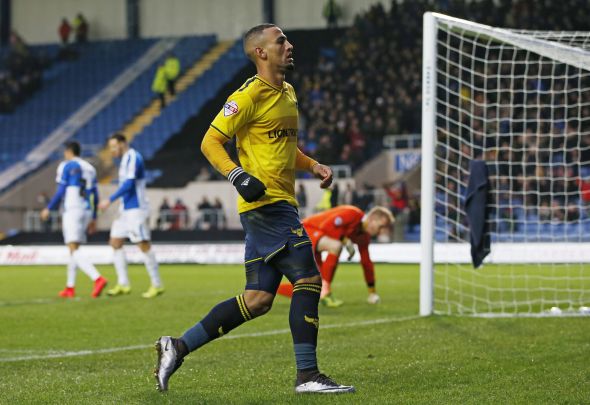 Michael Duberry has claimed Kemar Roofe’s “massive confidence” could make him an instant hit in the Championship for Leeds.

The Oxford striker has attracted the attention of numerous second-tier clubs on the back of a campaign in which his prolific forward play spearheaded his team’s promotion to League One and earned him League Two’s player-of-the-year award.

The ex-West Brom trainee finished the 2015-16 season with 25 goals and 12 assists in all competitions, including 17 goals in 40 league appearances.

Former Leeds defender Duberry, who has watched Roofe in action for Oxford, told the Yorkshire Evening Post: “You know about his goals, his pace and his creativity but he’s also got massive amounts of confidence. That would give him an edge in the Championship because he’d go to that level thinking he could make it and cope there.

Walsall-born Roofe signed his first professional contract with West Brom in 2012, but after a series of loans and no first team appearances he was sold to Oxford for an undisclosed fee last summer.

Duberry spent six years with Leeds between 1999 and 2005 and ended his Football League career with Oxford in 2013.

“No disrespect to Oxford but Leeds are different,” Duberry told the Yorkshire Evening Post. “It’s a culture there, a different culture, and you’ve got to be prepared for it.

“I say to people ‘don’t be fooled by their (Leeds United’s) Championship status.’ It’s still got the pressure of playing for a top club.

“If you understand that then you’ll be fine. If you think that it’s an easy move, you’ll get a massive shock. It would be a very big move for Roofe but the confidence he’s got – and the way he delivers on that confidence – makes me think he’d do fine in the Championship.

“He’s got the talent and his performance level this season says that he’s one of the best players in the lower leagues. I’d be surprised if Leeds are the only club looking at him because you have to take notice of someone doing what he’s done.”

Leeds are currently looking to bolster their squad under the command of new manager Garry Monk after he replaced Steve Evans last week.

Following their 13th place finish in the 2015-16 campaign, Leeds have set their sights firmly on a play-off spot in the Championship next season.

Previously, Oxford chairman Darryl Eales told The Oxford Mail that a number of Championship sides were interested and he wouldn’t stand in the strikers way of a move.

The U’s owner told the paper: “I hear beyond gossip there are four or five Championship sides in for Kemar.

“I’m trying to be realistic. I would love to keep him, but it’s not my decision – that has to be Kemar’s.

“What I would never do is stand in the way of a player’s career development.”