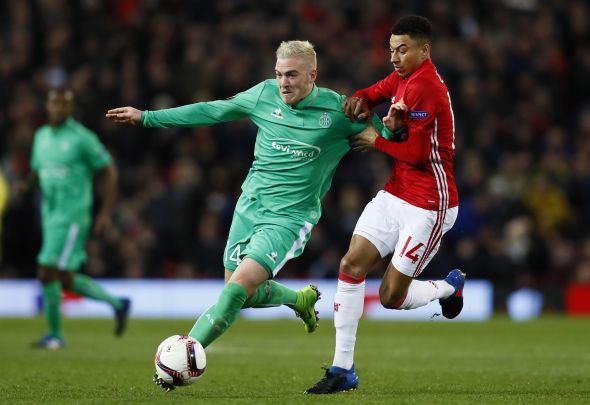 Jordan Veretout is unsure where his future lies after being watched by Aston Villa boss Steve Bruce on Thursday night, according to a report.

The Daily Mail claims Bruce was in attendance at Old Trafford as the midfielder’s loan side St. Etienne lost 3-0 to Jose Mourinho’s Manchester United in the Europa League.

Unaware that his parent club’s manager was watching him, Veretout revealed that he does not know where he will be at the end of the season but is remaining focused on the rest of 2016-17.

“No, I didn’t know that,” Veretout said, when asked if he knew Bruce was in attendance. “But I don’t really know him anyway. We’ll have to speak at the end of the season.

“I don’t know yet what’s going to happen in the summer and what I want to do. For the moment I just want to concentrate on these last few months I have at St Etienne. After that, I’ll think about Aston Villa again.”

Veretout, 23, could struggle to earn a place back in Villa’s midfield following Bruce’s busy month in the January transfer window, if he was to return.

Signed from Ligue 1 side Nantes in the summer of 2015 for a fee of £8million, Veretout tasted victory just five times in claret and blue despite making 29 appearances last term.

Bringing a player of Veretout’s calibre and quality back to Villa Park will be a huge boost to Bruce’s success as a Villa manager. Highly rated as a youngster, the Frenchman was brought to the Midlands with high hopes but failed to shine in a side that were dismally relegated to the Championship with just 17 points. However, the midfielder looks to have recovered his form with Les Verts and could be crucial in Villa’s 2017-18 aim of gaining promotion back to the Premier League. However, after starring with the Ligue 1 side as well as impressing on the Europa League stage, Veretout could attract interest from all over Europe with his future still undecided.

In other Aston Villa transfer news, this Championship goalkeeper has given his verdict on January interest from Bruce’s side.