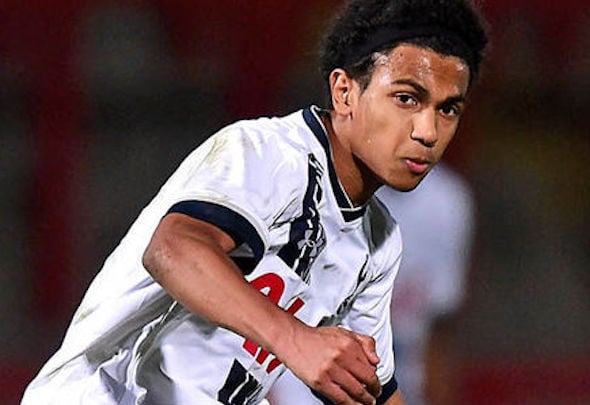 Tottenham wonderkid Marcus Edwards has ended doubts about his future at the club by agreeing the terms of a new contract, according to a report.

The attacking midfielder’s future had been up in the air after he rejected a number of offers from Spurs last season.

But the Mail claimed on Tuesday that Edwards has now committed to a contract with the club after being promoted from the youth team to the senior squad.

This came as manager Mauricio Pochettino delivered a warning about expecting too much from the 17-year-old.

There has not yet been an announcement from the club about the deal but Edwards is one of a number of youngsters in the Spurs squad that is currently on a two-match pre-season tour of Australia.

Pochettino has decided to give a chance to the youngsters and leave behind nine first-teamers who are still recovering from their exertions at Euro 2016.

Edwards produced a sparkling 30-minute cameo off the bench as Spurs lost 2-1 to Juventus in Melbourne on Tuesday.

Under the floodlights at the 100,000-capacity arena, the teenager showed he had an appetite for the big stage and came close to equalising as a youthful Tottenham, who had gone 2-0 down, impressed following substitute Erik Lamela’s second-half strike.

However, his manager believes the teenager should be sheltered ahead of the new Premier League season and asked for patience.

“I’m happy with all the young players,” Pochettino said, as quoted by the Mail. “They behaved fantastically and the performance (was good) too.

“It’s fair to pay attention to Marcus Edwards because he’s a very talented player but we have to be careful with all the young players.

The 17-year-old attacking midfielder has just completed his first year as as scholar in the club’s academy and is one of the highest rated players in his age group in England.

The Londoner, educated at Winchmore Hill School in Enfield, scored seven goals in 19 appearances for Spurs’ Under 18s last season but struggled to agree a new deal at White Hart Lane at the end of the campaign to throw his future up in the air.

The contract wrangle continued into the summer but, with Tottenham contemplating the possibility of losing Edwards to a major rival for nothing next year, the Mail report says revised terms were agreed earlier this month.

Spurs were alarmed at the possibility of losing such a promising young player, whose performances at age-group level have caught the eye of elite clubs in England and on the Continent.

Edwards has been at Tottenham since the age of eight and he has long been considered as a future first-team player.

In other Tottenham news, the club are to sell seven senior men after Pochettino sanctioned an exodus.