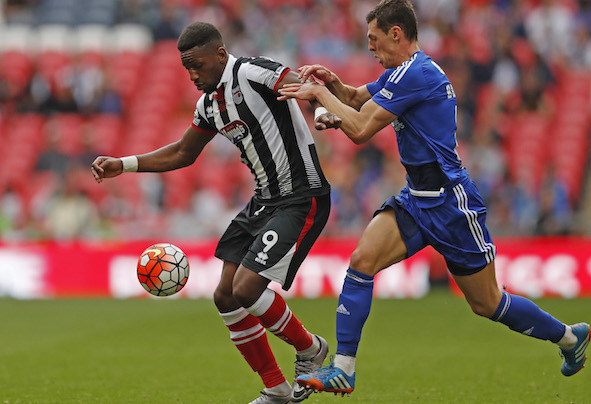 Garry Monk has admitted that Omar Bogle was among a number of targets considered by Leeds during the January transfer window.

The Yorkshire giants were strongly linked with signing the striker throughout the month before he eventually completed a last-gasp move from League Two side Grimbsy to Championship strugglers Wigan.

Grimsby director John Fenty went public with Leeds’ interest in Bogle on Wednesday as he explained how the promotion hopefuls were given the chance to beat the offer tabled by Wigan for Bogle after closely tracking him for weeks.

But Leeds turned down the opportunity to land the 24-year-old at the eleventh hour and he immediately completed a permanent transfer to the DW Stadium.

Monk did not deny that Leeds had kept close tabs on Bogle when questioned about Fenty’s comments at a media conference on Thursday.

Asked if Leeds were interested in the prolific striker, Monk said, as quoted by the Yorkshire Evening Post live blog (Thursday, 1.22pm), “we look at a number of targets”.

GM on Omar Bogle link: “We look at a number of targets.” … so basically no comment. #lufc

Leeds are perplexed as to why their promotion-chasing team did not splash out on a new striker last month to cover main man Chris Wood.

Monk did not attempt to hide his desire to land a new front man throughout the window but the only eventual arrivals were orthodox wing duo Modou Barrow and Alfonso Pedraza, who arrived from Swansea and Villarreal respectively in what will both initially be loan deals.

Bogle, who was stuck in non-league football at Solihull before joining Grimsby in the summer of 2015, served notice of his potential on Tuesday night with two goals on his full Wigan debut in a 2-2 league draw against Norwich.