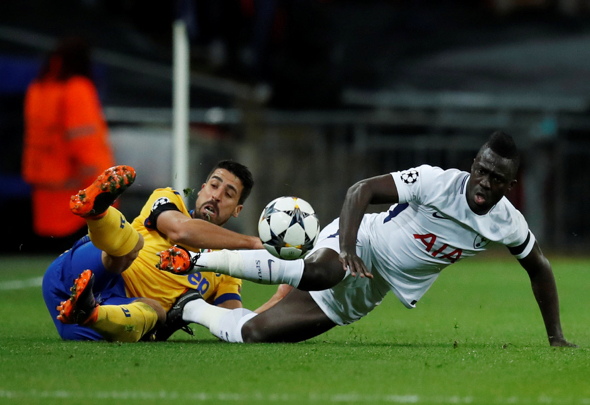 Tottenham played their part in an absolutely fantastic first half at Wembley as two European giants battled each other for a place in the Champions League quarter-finals, and fans were in awe of centre-back Davinson Sanchez.

While the Tottenham attackers gave the Juventus defenders a hard time, with Heung-Min Son and Harry Kane nearly scoring, Juventus were making things tough for Spurs too.

Jan Vertonghen was lucky not to give away a penalty after clearly fouling Douglas Costa.

Remarkably, none of the officials spotted what was a clear penalty.

His partner at the heart of the Tottenham defence was Sanchez and he put in a brilliant display which had fans comparing him to Ledley King.

And the rock-solid defence gave Tottenham the platform to go and score the hugely important first goal in the 38th minute through Heung-Min Son.

Spurs fans are hoping that Sanchez can continue to repel the Juventus attack and they took to Twitter to hail their defensive hero:

If there's ever been a smoother rise from a tackle I haven't seen it. So cool Sanchez. @daosanchez26 #thfc #coys pic.twitter.com/YCCWFv4wTn

Sanchez is up for it tonight

Davinson Sanchez with a Ledley-esque interception there.

That’s why I love Sanchez. We should be ahead though #COYS #THFC #Spurs #TOTJUV #UCL