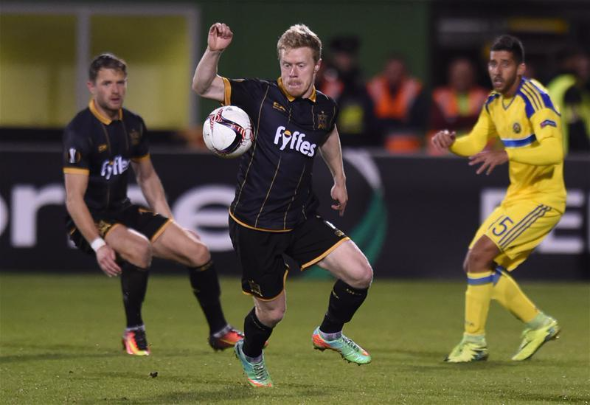 David Moyes could challenge Scotland’s two biggest clubs as he plans to win the race to sign Daryl Horgan, according to a report.

The Scottish Sun claim the Sunderland manager is set to make a move for the Republic of Ireland Under-21 winger amid interest from Celtic and Rangers.

Horgan has been impressive for Dundalk so far this season, scoring 10 goals in 22 appearances in the League of Ireland during the 2016-17 campaign.

He was called up to Martin O’Neil’s international squad for their World Cup qualifier against Austria last weekend but did not make an appearance as he was confined to the substitute’s bench.

The 24-year-old is reportedly being chased by a whole host of English clubs in addition to the Glasgow giants.

Among them, Sunderland, who are fighting to avoid relegation from the Premier League, seem poised to make him a top priority, while Newcastle, Bristol City and Aston Villa have all shown interest.

Moyes will hope to land Horgan in January ahead of former rival Brendan Rodgers who once sat in the opposite dug-out to the former Everton boss in the Merseyside derby.

Celtic have the resources to blow Rangers out of the water in the Horgan chase. They are now 10 points clear at the top of the Scottish Premiership and have already reached the final of the Betfred League Cup under Rodgers so they would be the likelier of the Old Firm teams to land the winger. However, Moyes’ Sunderland team are in desperate need of some fresh faces and the Scot could be willing to offer more money for the Irish winger. It would be a big step-up to English football for Horgan, who may relish the opportunity to challenge himself in the more glamorous Premier League, even if it’s just for half a season. However, a move to Celtic would almost certainly bring him success given the club’s excellent start to the season.

In other Celtic transfer news, the Hoops must fend off competition from Manchester United for their star striker.