Interim Rangers boss Graeme Murty has praised Ryan Jack for his performance against Aberdeen on Wednesday night and claimed it “showed why” the Gers signed him.

The midfielder joined the Ibrox giants in the summer after 13 years at Pittodrie and was the target from boos from the small number of travelling fans who made the journey to Ibrox on Wednesday as they Gers ran out comfortable 3-0 winners.

Jack put in an impressive shift alongside Jason Holt in the centre of midfielder for the Gers and will be looking to repeat the trick when the sides meet again at Pittodrie on Sunday afternoon.

Murty was delighted with the way Jack handled facing his old side and believes it will have set the midfielder up for a good showin at Pittodrie.

“I thought Ryan Jack handled the situation very well at Ibrox, I thought he showed the reason we wanted him at the football club,” Murty said, as quoted by the club’s official website.

“I thought he set himself up for, hopefully, a very good afternoon on Sunday.

After coming through the ranks with the Dons, Jack was eventually named as club captain in 2014 before being stripped of the armband by Derek McInnes after confirming his intention to leave the club last summer.

The 25-year-old made 250 appearances for Aberdeen in his time with the Pittodrie side and has been a mainstay in the Rangers starting XI since his summer transfer.

Since swapping Aberdeen for Glasgow, Jack has gone on to win his first Scotland cap, starting at right-back in last month’s friendly with Holland, at Pittodrie of all places.

In the latest Rangers news, Murty has had his say on Wednesday’s game against the Dons. 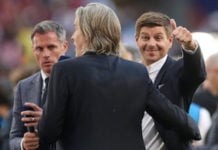 Exclusive: Red-hot Rangers star has no future at Ibrox – Whelan