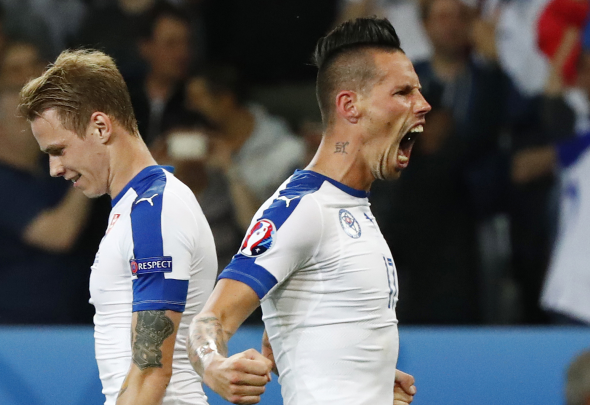 Liverpool have tabled a £35million bid for Napoli playmaker Marek Hamsik, according to a report.

The Slovakia international has been a key figure in the Serie A club’s renaissance in recent years and has been heavily linked with a move to the Premier League.

Gazzetta dello Sport journalist Emanuele Giulianelli has claimed for Tribal Football that Liverpool have made an offer to both  Napoli and the 28-year-old Euro 2016 star.

In an article posted on Monday headed ‘Liverpool table Hamsik offer’, Giulianelli said: “Aurelio De Laurentis, the Napoli president, has received a proposal of about €45million (£34.7million) for the Slovak midfielder, who has been offered a contract of four years at €6million (£4.6million).”

The reported offer on the table from Liverpool is worth £53.1million over the entirety of the four-year deal.

Otthe weekend, Hamsik’s agent Juraj Venglos plunged his client’s Napoli future into even more doubt by telling Italian website Il Mattino that the former Brescia midfielder was only 50 per cent sure on staying at Napoli, despite his contract keeping him at the Stadio San Paolo for the next two years.

Venglos said: “I’ve received calls from several clubs. Everything is possible. At the moment I would say that it’s 50/50 (that he’s leaving).

Hamsik has starred in Slovakia’s first two group games at Euro 2016, scoring the winner against Russia with a fantastic curling effort.

During his nine years at Napoli, Hamsik has scored an impressive 98 goals in 403 appearances from his attacking midfield position and also weighed in with 93 assists.

He has also scored 18 goals in 86 international appearances.

In other Liverpool transfer news, a Southampton star could be moving to Anfield in a £72.5 million deal.