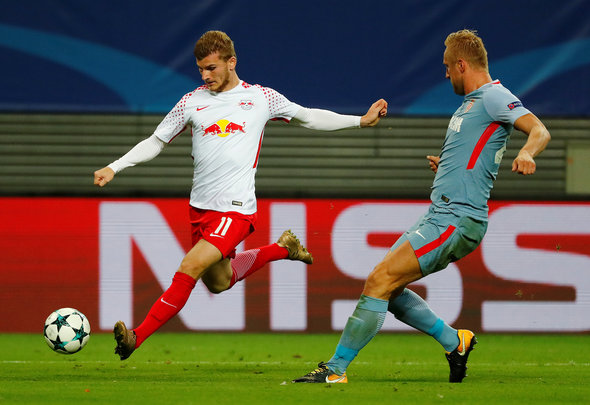 RB Leipzing striker Timo Werner has hinted that Tottenham is a potential destination for him next summer, as well as a host of other European sides.

Werner, 21, has been one of the key factors in Leipzig’s rise to the top in Germany and helped them secure Champions League football last season with his goal scoring exploits.

The European goal machine scored a stunning 21 goals in 31 league games last term, and has already started this season with a bang by finding the net four times in five appearances across all competitions.

The Telegraph reported in the summer that Tottenham are keen on the eight-times Germany international, and Werner has hinted that a potential move for him could be on the horizon in 2018.

“So far, I have travelled very well with Leipzig. That is why I do not think about what will happen in one, two, three years,” he said to Bild, as translated by Football.London.

“Of course I want to play at a big club. But we have not yet come to terms with the development in Leipzig. Perhaps RB will be a big club too – I’m quite sure.

“In Spain, there are a maximum of three clubs with Barcelona, Real Madrid and Atletico Madrid. In England, there are a bit more: Arsenal, Chelsea, Tottenham, Liverpool, Manchester United and Manchester City. Bayern Munich is also a big club, but for me it is not a topic that I am concerned with.

“Of course, I look at the offer [of a new contract]. If I do not extend now, that does not mean that I switch [clubs] in the summer. On the other hand, it is often not the case that players stay for five years if the contract is still five years. Football is so fast, you never know where you are tomorrow.”

Werner is one of the most exciting young players currently playing in Europe at the moment due to his explosive pace and goalscoring tenacity.

The former Stuttgart youngster made his Champions League debut on Wednesday night in Leipzig’s 1-1 draw with Monaco, although it was the first time since the opening day of the campaign that he failed to find the net.

Spurs already have two proven strikers on their books in Harry Kane and Fernando Llorente, as well as Vincent Janssen who is out on loan with Fenerbahce.

In other Tottenham news, Micky Hazard has admitted to feeling this during Spurs’ win over Borussia Dortmund.